The US Independence Day Parade held on July 4 at Illinois, Chicago turned into a tragic incident. A man shot down multiple people and many were injured as well. The police have arrested a man who they believe to be the gunman responsible for the shooting. 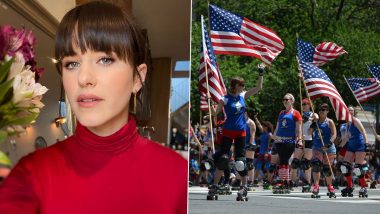 Actor Rachel Brosnahan, best known for her role in The Marvelous Mrs Maisel, is appalled by the mass shooting in Highland Park, Illinois on Monday that has left at least six people dead and dozens more injured. "I grew up in Highland Park and this parade is a highlight of the year for so many families. I'm sick to my stomach every time news like this comes out, but I don't wish the pit in your stomach as you call your family and friends to make sure everyone is okay on anyone. No words," she tweeted. Highland Park Shooting: Multiple Hurt in July 4th Parade Shooting in Illinois.

As many as six people were killed and 24 were hospitalized in a shooting at the US Independence parade route in north suburban Highland Park in Illinois. Dozens of others were injured and sent to hospitals, with 12 of them in serious condition. A gunman, who had apparently fired from a concealed spot on a rooftop, sent hundreds of marchers, parents with strollers and children on bicycles fleeing in terror, The Washington Times reported.

Singer Richard Marx, who also grew up in Highland Park, also reacted to the shocking incident. "I'm actively reaching out to check on the welfare of people I still know there. My heart is always broken by these constant mass shootings no matter where they occur but today I'm extra heartbroken. And extra angry at the senselessness," Marx tweeted.

US President Joe Biden has expressed shock over senseless gun violence. "Jill and I are shocked by the senseless gun violence that has yet again brought grief to an American community on this Independence Day. As always, we are grateful for the first responders and law enforcement on the scene," Biden said in a statement. The Courier: Rachel Brosnahan Opens Up on Playing the Role of CIA Operative.

Biden said he will monitor the situation closely amid the search for the shooter.

"I also surged Federal law enforcement to assist in the urgent search for the shooter, who remains at large at this time. Members of the community should follow guidance from leadership on the ground, and I will monitor closely as we learn more about those whose lives have been lost and pray for those who are in the hospital with grievous injuries," he added.