Italy has recalibrated its ties with China as old Western alliances are back on the table after a 2019 Belt and Road Initiative (BRI) deal failed. 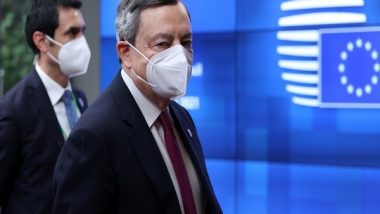 Rome [Italy], June 25 (ANI): Italy has repositioned its ties with China as old Western alliances are back on the table after a 2019 Belt and Road Initiative (BRI) deal failed.

At the beginning of his mandate, the newly appointed Prime Minister clarified that his administration is "strongly pro-European and Atlanticist, in line with Italy's historical anchors" and said he is worried about the increasing number of conflicts involving China.

Italy had signed a memorandum of understanding supporting China's Belt and Road Initiative in 2019 under the then Prime Minister Giuseppe Conte.

China represented an opportunity to export products made in Italy. Before signing the agreement, warnings came on many fronts. Both American and European leaders cautioned Rome against signing a bilateral deal with Beijing. Conte, on the other hand, was quick to reassure the public that the agreement was purely a commercial one and that it favoured Italian national interests, reported Foreign Policy.

Conte was lured by China's huge market potential. Highlighting both the United States' role as Italy's main strategic partner and China's growing global footprint, the then-prime minister envisioned a role for Rome and Brussels to act as a potential bridge between Washington and Beijing.

In addition to a change in perception in the highest ranks of the government, a more nuanced discussion on China is also taking place within the Parliament.

Beijing's escalating crackdown in Hong Kong and a renewed global attention toward human rights abuses in Xinjiang have sparked debate in Italy, where members of the lower chamber are asking the government to do more to push back against China.

Similarly, this May Italian deputies gave unanimous approval to a cross-party resolution that strongly condemned human rights abuses in Xinjiang and insisted on the need for an independent investigation in China's northwest autonomous region.

Further, all Italian members of the European Parliament voted in favor of the EU's resolution, following China's sanctions against European parliamentarians and researchers, that officially froze discussion on the EU-China Comprehensive Agreement on Investment.

Italy is also emphasizing economic security and prioritizing industrial strategy, including protecting national champions in key sectors. In just four months, the Draghi administration has used the government's power a number of times to limit Beijing's presence in Italy's 5G infrastructure and to block the takeover of a semiconductor company.

In addition, the suspension of talks over the potential sale of Italian truck-maker Iveco to China's FAW Group benefited from coordination with France, reported Foreign Policy.

Italy's reemphasis on its traditional alliances comes with the realization that the extravagant commercial promises made around 2019 have not been met.

As highlighted in a report by the Torino World Affairs Institute published in late 2020, "the [economic] calculations [that justified the signature of the Belt and Road memorandum] were optimistic at best, if not entirely fallacious."

Ironically, in 2020, other European countries that have not signed up for the Belt and Road Initiative such as France and Germany did equal or better trade with Beijing than Rome did. Prospective collaborations between China and Italy in a number of sectors enshrined in the memorandum did not materialize, informed Meacci.

The botched handling of the Belt and Road memorandum has come with severe political costs. As a member of the G-7, a founding member of both the EU and NATO, and the third-largest economy of the eurozone, Italy endorsing the Belt and Road Initiative gave Chinese President Xi Jinping's pet project a significant boost at home and abroad.

On the other hand, joining the Belt and Road meant that Rome became viewed as "the European weak link in the power struggle with China," Politico reported.

Rome's new China policy under the Draghi administration thus seeks a return to its "historical anchors" and is showing a clearer vision on Italy's international posture.

A stronger alignment with the European and trans-Atlantic stance is exemplified by the endorsement of a green alternative to the Belt and Road, announced at the G-7 meeting this month.

While each member has different views on the geographical scope of the project, they "broadly agree on the need for a more transparent alternative to the Chinese program", reported Foreign Policy. (ANI)