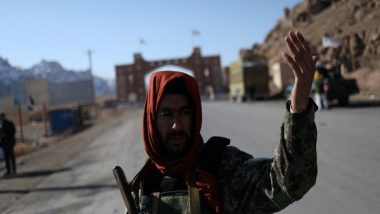 The delegation will first meet with the US envoys and the talks would focus on the release of the frozen assets, the removal of its members' names from the blacklist, and the extension of relations between Kabul and Washington, according to Tolo News. Also Read | Earthquake in China: Quake of Magnitude 5.8 Hits Qinghai Province.

Earlier, Afghanistan delegates landed in Norway's capital Oslo on Saturday night. "In the first meeting, with the Americans, the release of the Afghan assets, the removal of the blacklist, and also the resumption and extension of bilateral ties will be discussed," said Inamullah Samangani, deputy spokesman of the Taliban. Also Read | Xi Jinping Himself is a Risk to the Chinese Economy, Says Report.

The visit is the first of the Taliban delegation to Europe after it took power in Kabul last year and the meeting will be held from January 23 to 25, according to a statement of the Ministry of Foreign Affairs of Norway.

Earlier, Afghan missions abroad which are run by diplomats of the former government in a joint statement praised Norway for convening the talks on Afghanistan but called for further pressure by the international community for the formation of an inclusive government as well as to ensure human rights in the country.

"The force which came to power after the changes is not inclusive and it doesn't reflect the wishes and intentions of the people," said Zarifa Yaqobi, a member of the Mawj and Tahwal movement. However, the official invitation of the Taliban's delegation to Norway faced diverse reactions.

A movement named "Afghanistan Women's Government in Exile" in a statement accused the Islamic Emirate of violating human rights and criticized the Norwegian government for inviting the Kabul delegation. Some Afghans living in Europe staged protests in Oslo over the talks as well in front of the Norwegian embassy in London, according to Tolo News.