Oli is heading a minority government after losing a trust vote in the House last month. 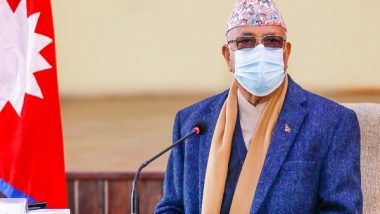 Kathmandu, June 10: Nepal's embattled Prime Minister K P Sharma Oli on Thursday expanded his Cabinet for the second time in a week amid widespread criticism and the ongoing political crisis in the Himalayan nation. Oli is heading a minority government after losing a trust vote in the House last month.

According to the Office of the President, the Cabinet now has a total of 25 members with the induction of seven new ministers and a minister of state. In the latest rejig, Khagraj Adhikari, a close confidante of Oli, has been given the portfolio of the Ministry of Home Affairs, MyRepublica news website reported. Adhikari had earlier served as the Health Minister in the Sushil Koirala-led Cabinet. KP Sharma Oli Reappointed as Nepal Prime Minister After Opposition Fails to Garner Majority.

The home minister post was vacant after the Supreme Court on May 20 scrapped the appointment of seven ministers, including Ram Bahadur Thapa who was leading the Home Ministry, saying they were not lawmakers. Oli dissolved the House a day later. Thapa had joined the CPN-UML after the erstwhile Nepal Communist Party (NCP) was dissolved.

The other faces are Janta Samajbadi Party (JSP)'s Raj Kishor Yadav (Minister for Industry, Commerce and Supply) and Nainakala Thapa ( Minister for Communication and Information Technology). Thapa is the spouse of the former home minister.

Oli picked Jwala Kumari Sah (Agriculture), Narad Muni Rana (Forest), Ganesh Kumar Pahadi (General Administration) and Mohan Baniya (minister without portfolio) in his Cabinet along with Asha Kumari BK, who has been provided with the portfolio of Minister of State for Forest and Environment.

On Friday last week, in a move to consolidate his grip on power and boost ties with India, 69-year-old Oli expanded his Cabinet with the inclusion of eight ministers and two ministers of state from the Madhes-based Janata Samajwadi Party (JSP). Oli appointed three deputy prime ministers, including two from the Madhesi community, during the reshuffle.

The third deputy prime minister is Bishnu Poudyal from UML, who has got the portfolio of the Ministry of Finance. Madhesi parties in Nepal claim to be representing the cause of Madhesis, who are inhabitants of the Terai region. The community shares strong cultural and family bonds with India.

Nepal plunged into a political crisis on December 20 last year after President Bidya Devi Bhandari dissolved the 275-member House and announced fresh elections on April 30 and May 10 at the recommendation of Prime Minister Oli, amidst a tussle for power within the ruling Nepal Communist Party (NCP).