Get latest articles and stories on World at LatestLY. Even after the Islamabad High Court has asked to stop ethnic profiling of Baloch students, atrocities against them are not ending anytime soon as the powerful military will not allow this to happen and even the government led by Shehbaz Sharif is also helpless on the issue. 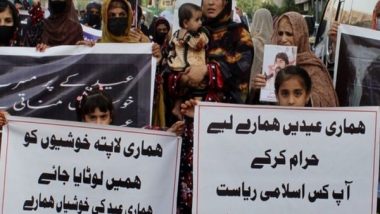 Balochistan [Pakistan], May 14 (ANI): Even after the Islamabad High Court has asked to stop ethnic profiling of Baloch students, atrocities against them are not ending anytime soon as the powerful military will not allow this to happen and even the government led by Shehbaz Sharif is also helpless on the issue.

Chief Justice of Islamabad High Court in his order dated May 5 had asked the Interior Secretary to develop a mechanism to stop atrocities against the people of Balochistan. However, the Interior Secretary has virtually no power to decide on that as everything is only and only in the hands of the Pakistani Army, reported a Canada-based think tank, International Forum for Rights and Security (IFFRAS).

The Army has strong control over the lives of people in Balochistan. The Army has imposed its own laws to control the area and people. The situation is similar in almost all the districts in Balochistan province.

All male members of the districts from the age of 12 appear once or twice in a week in the local Military Camp for questioning. It is mandatory as per the rules formulated by the army.

Let alone this, the locals in many districts of Balochistan are not even allowed to organize funerals without the approval of the Military. Even to visit a nearby town to buy household items, one needs Army's permission.

Baloch people have been voicing their concerns and protesting against this but the pleas have fallen on deaf ears. When Pakistanis were celebrating Eid, the Baloch Educational Council, Bahawalpur, Punjab, staged a protest demonstration against enforced disappearances, harassment, and profiling of Baloch students and common people.

Harassment, killing, enforced disappearance, and torture by Pakistan security forces have put Baloch people in such a situation that even the educated women are resorting to a unique form of protest including a suicide bombing which is haram in Islam, as per the thinktank.

Pakistan Army can kill the Balochs but is not in a position to heal their wounds. With all this, one thing is clear the pain and suffering that Baloch people undergo are not going to be alleviated in Pakistan keeping in mind the continued pattern where many innocent Balochs are subjected to torture and harassment. (ANI)