Addressing the Defence and Martyrs Day ceremony as Chief Guest, the army chief said, "The East Pakistan crisis, was not a military but a political failure. The number of fighting soldiers was not 92,000, rather only 34,000, the rest were from various government departments," on Dhaka debacle in 1971. 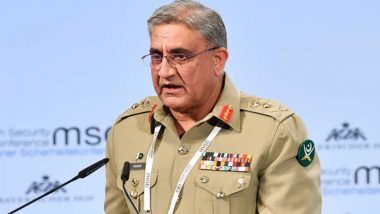 Rawalpindi, November 25: The outgoing Chief of Army Staff (COAS), General Qamar Javed Bajwa on Wednesday created a controversy by saying that only 34,000 Pak soldiers surrendered to India in the 1971 War.

Addressing the Defence and Martyrs Day ceremony as Chief Guest, the army chief said, "The East Pakistan crisis, was not a military but a political failure. The number of fighting soldiers was not 92,000, rather only 34,000, the rest were from various government departments," on Dhaka debacle in 1971.

Exactly 50 years ago, the largest military surrender after the second world war happened when 93,000 soldiers from the Pakistan Army laid down their arms in front of Indian Forces - liberating and giving birth to a new nation Bangladesh.

Bajwa said that the sacrifices of these brave Ghazis (war veterans) and martyrs, were not duly acknowledged by the nation to date, which was a huge injustice, reported Pakistan Today. Meanwhile, Bajwa warned about making unwarranted criticism against the Pakistan army, saying "it has limits."

Addressing the Defence and Martyrs Day ceremony as Chief Guest, the army chief said that a fake narrative was coined to malign the senior leadership of the Pakistan army and indecent words were used to malign the army but the army leadership despite having resources and options observed restraint but that has limits too, reported Pakistan Today.

Without naming anyone, COAS said that a fake narrative was coined to create instability in the country and now efforts are afoot to get away with this fake narrative.

"Senior military leadership was maligned. Let me make it clear that army leadership would never compromise on national interest. Do you believe that armed forces would sit idle against a foreign conspiracy. This is impossible; rather a great sin. Those who plan to create a rift between the army and the people will never succeed," he added.

The Army chief said they should be fully careful on this count though it was the right of the people to have a positive analysis. Some people opted for a fake and false narrative firstly for creating chaos, and now they were retracting from that dubious position, he added.

He said that the Army leadership had many options and resources to counter this narrative but the Army showed restraint in the larger interest of the country and abstained from making any negative statements, reported Pakistan Today.

"One must understand that there is a limit to this restraint. I want to forgive this inappropriate and aggressive stance against me and the Army and move forward as Pakistan is supreme for all of us. Political parties and individuals may come and go but the country will remain intact forever," the Pak army chief said. Pakistan PM Shehbaz Sharif To Send New Army Chief Appointment Summary to President Arif Alvi.

The Army, he said, had initiated its catharsis and hoped that the political parties would also review their conduct, reported Pakistan Today. "It is also a fact that mistakes have been committed by every institution, political party and civil society. We should learn from these mistakes and move forward," he added. The Army chief said he was proud to have been the commander of the Pakistan Army for the last six years.