Get latest articles and stories on World at LatestLY. Author and political commentator Arif Jamal said that Pakistan commits human rights violations with the help of terrorism and militancy and later glorifies these abuses in the name of Islam. 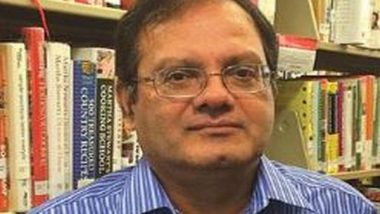 Islamabad [Pakistan], June 28 (ANI): Author and political commentator Arif Jamal said that Pakistan commits human rights violations with the help of terrorism and militancy and later glorifies these abuses in the name of Islam.

Jamal made these remarks while speaking in a podcast show "Human Rights Sentinel" hosted by Musaffa Akhawan and Senge Sering. He is a journalist, author and political commentator from Pakistan's Punjab province and has written many books.

Replying to a question by one of the hosts on Pakistan's strategic paradigm focused on infiltration in Kashmir, Jamal said, "Human rights violations are associated with militancy and terrorism which are often ignored because Pakistan tries to glorify these in the name of Islam and service to Islam."

Jamal highlighted that there is a spike in "religious virus" in Pakistan. He noted that the Pakistani media turns a blind eye to the issues that are critical to Kashmir.

"I realized that no Pakistani media to discuss these subjects and publish my articles the way I wanted them to be published," he said adding that this is one of the main inspirations that drove him into writing his researched articles and unearthing the truth about Pakistan in front of others.

"I realized that I should do deep research on these subjects. I also published my findings to the extent they (Pakistani media) could take it," he continued.

He said that Pakistan tries to promote jihadist ideology in the valley of Kashmir and the country's media suppresses the voices of those who try to unveil these untold stories.

Two of his books "Shadow war: the untold story of Jihad in Kashmir" and "call for transnational Jihad: Lashkar-e-Taiba of Pakistan" have received global recognition.

"Pakistani military is also waging jihad in the region and helping the terrorist groups in the country," Jamal noted. The hosts of the podcast admired the work of the authors and said that these issues would never come to the forefront if people like you (Jamal) were not there to research these issues.

Furthermore, commenting on Pakistan's actions in Kashmir to promote its strategic interests, Jamal said that after the 1987 Jammu and Kashmir Legislative Assembly elections Pakistan tried to promote violence in the region and eyed to attract international attention to Kashmir. "They recruited disgruntled youth from the valley. The initial plan was that 50-100 young people from the valley would be trained in PoK and would be sent back."

Author Jamal stressed that money is also one of the ways that Pakistan tries to promote jihad.

Notably, Jamal has remained associated with Harvard University, New York University and University College of London as a visiting fellow. He has written more than 200 investigative articles on political Islam including Shia genocide.

He appeared on C-SPAN, a US cable network, to discuss Pakistan-American relations. Arif has contributed to New York Times and writes regularly on strategic affairs for several Pakistani newspapers. (ANI)