He got 57.6 per cent votes versus Lennon's 42.4 per cent, becoming the first non-white and Muslim leader of a major political party in the UK. 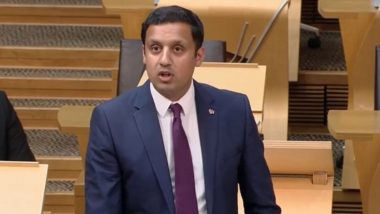 London, February 28: Anas Sarwar, a Pakistani-origin Member of the Scottish Parliament (MSP) for Glasgow, has taken over as the new leader of the opposition Labour Party's Scottish wing after he won a two-way leadership race, becoming the first non-white and Muslim leader of a major political party in the UK.

Sarwar, 37, who beat central Scotland MSP Monica Lennon, takes charge months ahead of elections for the devolved Scottish Parliament in May. He got 57.6 per cent votes versus Lennon's 42.4 per cent, becoming the first non-white and Muslim leader of a major political party in the UK.

"I want to say directly to the people of Scotland, I know Labour has a lot of work to do to win back your trust,” Sarwar said in his acceptance speech on Saturday.

"Because if we're brutally honest, you haven't had the Scottish Labour Party you deserve. With rising injustice, inequality and division, I'm sorry we haven't been good enough. And I will work day and night to change that, so we can build the country we all need," he said.

On being the first non-white leader of a major political party, Sarwar noted: "That doesn't say something about me. That says something great about Scotland and its people."

First Minister Nicola Sturgeon congratulated Sarwar on Twitter: "He (and his dad before him) and I are long-time political opponents, but I also like and rate him. "That may not always be obvious in the weeks ahead as election battle is joined, so worth saying so now."

Glasgow-born Sarwar's father Mohammad Sarwar is a Pakistani-origin businessman-politician who serves as the governor of Pakistan's Punjab province with the Pakistan Tehreek-e-Insaaf (PTI) party. Previously, he was a Labour Member of Parliament (MP) in the House of Commons representing Glasgow until 2007, after which he became more active in Pakistani politics.

In Glasgow, he was succeeded by his son Anas, who has also served as a deputy leader of Scottish Labour. UK Labour leader Sir Keir Starmer said: “Huge congratulations to Anas on his election as leader of the Scottish Labour party. I look forward to working with him to secure our economy, protect our NHS (National Health Service) and rebuild our country”.

“We will fight the Scottish parliamentary elections by making the case for a socially just Scotland in a modern United Kingdom. Under his leadership, Scottish Labour will focus on what unites us – not what divides us.

“I know Anas will do the hard work that is necessary to win back the trust of the Scottish people and build for the future as we emerge from this pandemic,” Starmer said.

Losing candidate Lennon took to Twitter to congratulate the new leader as well as to thank her campaign staff and issue a call for party unity. "Congratulations to Anas Sarwar, our new leader. Proud to have been part of this positive leadership debate," she said.

The contest for a new Labour Party leader for Scotland had been triggered after Richard Leonard stepped down, saying it is in the best interests of the party.

The former union official had faced calls to quit from some of his own MSPs last year amid concerns that his leadership style and association with former Labour Leader Jeremy Corbyn could damage the party in the forthcoming Scottish Parliament election.