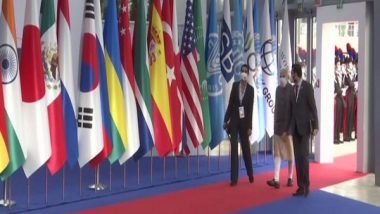 The second day of the G20 Summit in Rome started with a walk of the Heads of Delegation in one of the symbolic places of the historic downtown: Trevi Fountain. Also Read | 1.5 Million Children in Central Africa Need Emergency Aid: UN.

After the end of the first session, the Convention Center La Nuvola will then host both the multilateral sessions and the bilateral meetings of the leaders.

Later, a side event is scheduled on the role of the private sector in the fight against climate change. The main speaker will be Charles, Prince of Wales.

The Summit will end with the traditional final press conference by Italy's Prime Minister Mario Draghi who, opening the meeting yesterday, highlighted that "multilateralism is the best answer to the problems we face today.

On Saturday, Prime Minister Modi had called on Pope Francis at the Vatican City. He later invited Pope to visit India. He also attended a session on Global Economy and Global Health at the G20 and later held bilateral talks with French President Emmanuel Macron and Singapore Prime Minister Lee Hsien Loong.