Get latest articles and stories on World at LatestLY. The Taliban has implemented a gender segregation plan in the western Herat province, a media report said on Friday. 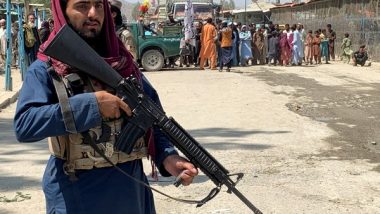 Kabul [Afghanistan], May 13 (ANI): The Taliban has implemented a gender segregation plan in the western Herat province, a media report said on Friday.

Men are not permitted to dine with family members in family restaurants, Khaam Press reported citing sources in Herat province.

According to the Afghan news agency, the rule of the Ministry for Promotion of Virtue and Prevention of Vice applies "even if they are husband and wife."

An Afghan woman revealed the manager of a Herat restaurant told her to sit separately from her husband.

Riazullah Seerat, a Taliban official at the Ministry for Promotion of Virtue and Prevention of Vice, said that the ministry has issued a directive requiring Herat's public parks to be gender-segregated, with men and women authorized to attend only on separate days.

"We told women to go to parks on Thursday, Friday, and Saturday," he continued. "The other days are set aside for males to visit for leisure and exercise."

Back in March, the Taliban had issued a similar order, banning men and women from going to amusement parks on the same day.

Earlier today, the foreign ministers of western countries in a joint statement expressed disappointment about escalating restrictions imposed by the Taliban that impact the human rights of Afghan women.

"All Afghans should be able to enjoy their fundamental human rights. These rights are indivisible and inalienable, expressed in international human rights law, and endorsed by all members of the United Nations," the statement read. (ANI)