Get latest articles and stories on World at LatestLY. Launching an attack against Democrats for not backing measures to increase security in schools, former US President Donald Trump on Friday appeared to be defending prominent gun-rights lobbying group National Rifle Association (NRA) amid growing calls for gun reforms. 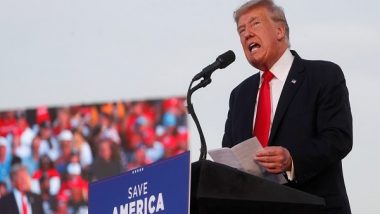 Washington [US], May 28 (ANI): Launching an attack against Democrats for not backing measures to increase security in schools, former US President Donald Trump on Friday appeared to be defending prominent gun-rights lobbying group National Rifle Association (NRA) amid growing calls for gun reforms.

This comes as nationwide outrage is being witnessed after a teenage gunman killed 19 children and two elementary school teachers in yet another mass shooting in the US.

Trump made these remarks while addressing the NRA annual meeting amid growing calls for stronger gun control measures after the killing in the town of Uvalde in Texas. The former US President defended the NRA and rejected calls to cancel its annual convention.

"Every time a disturbed or demented person commits such a hideous crime, there's always a grotesque effort by some in our society to use the suffering of others to advance their own extreme political agenda," Al Jazeera quoted Trump as saying at the event in Houston, Texas.

"Even more repulsive is their rush to shift blame away from the villains who commit acts of mass violence and to place that blame onto the shoulders of millions of peaceful, law-abiding citizens who belong to organisations such as our wonderful NRA," he said while referring to gun reform advocates.

The former president called for increasing school security instead of focusing on gun reform. "If the United States has USD 40 billion to send to Ukraine, we should be able to do whatever it takes to keep our children safe at home," he said.

Amid the public uproar over the killings, NRA and Republican officials painted the Uvalde gunman as deranged and evil, directing the blame to the gunman himself.

NRA's CEO and Executive Vice President Wayne LaPierre said the group disagrees with US President Joe Biden's position on the law that grants US citizens to bear arms but is on the same page with him on other steps that can be taken to address gun violence.