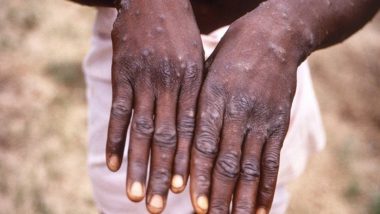 Geneva, May 27: World Health Organisation said on Friday that Monkeypox cases have risen across the world taking the total number of infections to 200 and cases have been reported across 20 countries.

"We have about 200 confirmed cases and more than 100 suspected cases, but we expect those numbers to go up. It is across more than 20 countries and in four WHO regions" Maria Van Kerkhove, the technical lead of COVID-19 response at WHO's Emergency Diseases Unit said today.

The health body said this virus has been circulating for decades and very little attention has been paid to this. "Sadly and there are 1000 if not thousands of cases that are occurring there," she said. "We are asking countries to increase surveillance," she said. Monkeypox Outbreak in US: CDC Confirms 9 Cases Across 7 States.

"So, we want to make sure that we dont stigmatise anyone related to this. This is about raising awareness. This is not a sexually transmitted infection. We do know that Monkeypox does transmit primarily from physical contact, skin to skin contact and that includes sexual contact," she said. The WHO official noted that Monkeypox is not the same as COVID-19 and "we are not seeing that type of expansion."

Monkeypox is a viral zoonosis (a virus transmitted to humans from animals) with symptoms very similar to those seen in the past in smallpox patients, although it is clinically less severe. According to WHO, Monkeypox typically presents clinically with fever, rash and swollen lymph nodes and may lead to a range of medical complications. Monkeypox is usually a self-limited disease with symptoms lasting from 2 to 4 weeks. Monkeypox Scare in India: West Bengal Govt Asks Hospitals to Ready Isolation Beds for Patients Coming From Abroad.

Issuing an alert to the National Centre for Disease Control (NCDC) and Indian Council of Medical Research (ICMR), the Central government has asked them to keep a close watch on the monkeypox situation and send samples of symptomatic travellers to the National Institute of Virology (NIV) in Pune for further investigation.