Amharas are the second most populous ethnic group in Ethiopia and they have been targeted repeatedly over the last year. Fighters from Amhara, however, have been accused by witnesses of carrying out atrocities along with Ethiopian and Eritrean forces in the Tigray conflict. 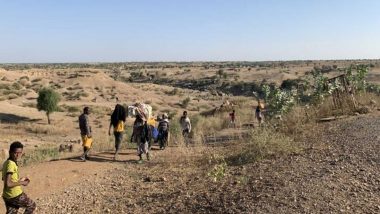 Violence in the Metekel Zone of the Benishangul-Gumuz region is separate from the deadly conflict in Ethiopia's northern Tigray region. That's where Ethiopian and allied regional forces began fighting Tigray regional forces in early November. The Tigray war sent more than 61,000 Ethiopians into Sudan's provinces of al-Qadarif and Kassala. Ethiopia Massacre: Horrible Memories of Bodies With Gunshots Fallen on Streets Haunt Witnesses As They Recall Massacre in Ethiopian Holy City.

The UNHCR said most of the 7,000 asylum seekers who fled Metekel have been living among Sudanese host communities. It said it was working with local authorities in the Blue Nile province to respond to the humanitarian needs of the newly arrived, many of whom have arrived in hard-to-reach places along the border.

Tensions escalated in the past three months in Metekel Zone, prompting Ethiopia's government to declare a state of emergency in the area on Jan. 21, the U.N. agency said.

The Ethiopian Human Rights Commission said more than 180 people were killed in separate massacres in Metekel in December and January. Amnesty International reported in December that members of the ethnic Gumuz community — the ethnic majority in the region — attacked the homes of ethnic Amhara, Oromo and Shinasha. The rights group said the Gumuz set the homes on fire and stabbed and shot residents. The Gumuz see minorities as “settlers,” the rights group said.

Ethnic violence poses a major challenge to Ethiopian Prime Minister Abiy Ahmed as he tries to promote national unity in a country with more than 80 ethnic groups.

Amharas are the second most populous ethnic group in Ethiopia and they have been targeted repeatedly over the last year. Fighters from Amhara, however, have been accused by witnesses of carrying out atrocities along with Ethiopian and Eritrean forces in the Tigray conflict.

The new influx of refugees into Sudan comes amid tensions between Addis Ababa and Khartoum over a border dispute and the deadlocked talks over a massive dam Ethiopia is building on the Blue Nile, the main tributary of the Nile River.