The United Nations Security Council (UNSC) will be meeting on Friday, August 6, under Indian Presidency to discuss the surge in violence by the Taliban in Afghanistan post US drawdown. 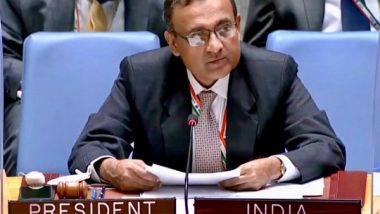 New York [US], August 5 (ANI): The United Nations Security Council (UNSC) will be meeting on Friday, August 6, under Indian Presidency to discuss the surge in violence by the Taliban in Afghanistan post US drawdown.

"UN Security Council will meet on Friday, 6th August, under Indian Presidency to discuss and take stock of the situation in Afghanistan," tweeted India's Permanent Representative to United Nations, TS Tirumurti on Thursday.

India on Sunday assumed the rotating presidency of the UNSC.

The Afghan foreign ministry said Atmar talked about the escalating violence by the Taliban and foreign terrorist groups in Afghanistan and called for a meeting of the UNSC to discuss the situation.

Meanwhile, the members of the UNSC condemned the attack against a United Nations compound in Herat, Afghanistan, which claimed the life of Afghan security forces guard and injured other officers.

This comes amid the Taliban's heavy offensives in Afghanistan. Moreover, the Taliban spokesman Zabihullah Mujahid said on Wednesday that they will continue their attacks on Afghan officials, after a car bomb attack on the country's acting defence minister General Bismillah Mohammadi's house.

In the past few weeks, Afghanistan has witnessed a surge in violence as the Taliban has intensified their offensive against civilians and Afghan security forces with the complete pullback of foreign forces just a few weeks away. (ANI)