The United State Senate has confirmed the nomination of General (retired) Lloyd Austin to serve as secretary of the defence department, making him the first ever African American to occupy the top Pentagon position. 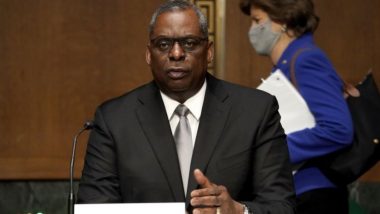 Washington, Jan 23: The United State Senate has confirmed the nomination of General (retired) Lloyd Austin to serve as secretary of the defence department, making him the first ever African American to occupy the top Pentagon position.

The nomination was confirmed in an overwhelming 93-2 vote. Soon he was sworn in by Tom Muir, acting director of Washington Headquarters Services. Thereafter, Austin received an intelligence briefing.

Vice President Kamala Harris would administer the ceremonial oath to Austin next week. President Joe Biden thanked the senate for confirming Austin and working to get his cabinet in place.

“It's an honour and a privilege to serve as our country's 28th secretary of defence, and I'm especially proud to be the first African American to hold the position. Let's get to work,” Austin tweeted.

A day earlier, the House of Representatives voted 326-78 to pass a waiver exempting Austin from the seven-year 'cooling off period' for retired generals taking over as defence secretary. The senate approved the waiver by 69-27 votes.

This is the third time that Congress has given such a waiver to a retired general. The previous one being of General (retired) James Matin who was appointed as defence secretary by former President Donald Trump in January 2017 and George Marshall in 1947. Austin had retired as a four-star Army general in 2016.

“I am honoured to have this chance to serve again and to do so alongside you and your families. My wife, Charlene, and I know all too well the sacrifices you make to keep this country safe. That safety is job one, and I promise to work as hard as you do at it,” Austin said in his message to the defence forces soon thereafter.

According to new Pentagon spokesperson John Kirby, the president called Austin in the afternoon, shortly after his arrival at the pentagon.

The call was his first to a foreign leader as the defence secretary, and reinforces the importance of the NATO alliance to the US, Kirby said.

“The two leaders discussed the importance of our shared values, the current security environment including maintaining a strong NATO deterrence and defence posture, and the ongoing missions in Afghanistan and Iraq. They also briefly reviewed the upcoming NATO Defence Ministerial and agreed to discuss it again in more detail in the coming weeks,” Kirby said.

Austin said that he looked forward to developing a close working relationship with Stoltenberg and both leaders pledged to consult in the months ahead, he said.

The White House welcomed the swift confirmation of Austin. “We applaud the senate's strong bipartisan confirmation of Lloyd Austin, who has been breaking barriers all of his life, as the first black secretary of defence in our nation's history,” White House Press Secretary Jen Psaki told reporters at her daily news conference.

In his message to the department of defence personnel, Austin said that his job as secretary of defence is to make them more effective at doing their work.

“That means ensuring you have the tools, technology, weapons, and training to deter and defeat our enemies. It means establishing sound policy and strategy and assigning you clear missions. It means putting a premium on cooperation with our allies and partners. And it means living up to our core values, the same ones our fellow citizens expect of us,” Austin said.

“Right now, of course, doing my job also means helping our country get control of the pandemic, which has killed more than 400,000 Americans. You have already come to the aid of our nation's health care professionals. You can expect that mission to continue," he said.

"But we must help the federal government move further and faster to eradicate the devastating effects of the coronavirus. To that end, we will also do everything we can to vaccinate and care for our workforce and to look for meaningful ways to alleviate the pressure this pandemic has exerted on you and your families,” he said.