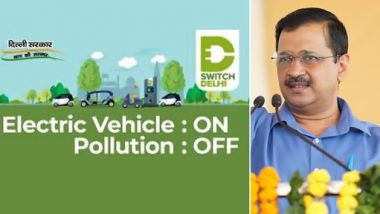 New Delhi, February 27: In a bid to make Delhi the Electric Vehicle capital of India,  Deputy Chief Minister Manish Sisodia on Thursday announced that all departments of the Delhi government will now use only electric vehicles as part of 'Switch Delhi' campaign. Sisodia said that the transition to EVs will be done within the next six months. While launching the campaign, Delhi Chief Minister Arvind Kejriwal said that his government will ensure that within the next six months, only electric vehicles are hired by different departments.

With a vision to promote the adoption of electric vehicles in the city, the  Delhi government had announced the Delhi Electric Vehicle Policy on August 7, 2020. This decision was taken to tackle the problem of air pollution in the national capital. The policy aims to benefit Delhi's air quality, the policy intends to deploy 25% of all new vehicles to be battery-operated vehicles by 2024. Under the policy, it promised to waive registration fee, road tax, and provide an incentive of up to Rs 1.5 lakh for new cars in the national capital. List of Public Charging Stations in Delhi.

"It's history! Driven by the vision of CM @ArvindKejriwal to make Delhi the ''Electric Vehicle capital'', Delhi govt today became the 1st in the world, not just India, to mandate its entire hired car fleet to switch to electric within a deadline- 6 mths. @SwitchDelhi begins at home," Sisodia tweeted.

Sisodia said that over 2,000 cars will be impacted by this decision and will transition to EVs in next 6 months. "We hope this decision inspires cities and govts around India and the world to tackle the pollution and climate change problem with the seriousness and urgency it deserves," he said.

(The above story first appeared on LatestLY on Feb 27, 2021 03:32 PM IST. For more news and updates on politics, world, sports, entertainment and lifestyle, log on to our website latestly.com).