Energy Efficiency Services Limited (EESL) will be installing 84 fast charging stations in the Capital Region by next month. 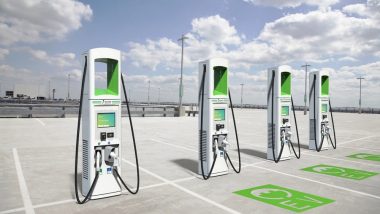 Energy Efficiency Services Limited (EESL), state-run company is planning to set up about 84 fast charging stations for electric vehicles (EVs) in Delhi. The company is focusing on setting up these fast charging stations by March 2019. According to the market reports, these stations will be installed at several parking spaces as well as high visibility areas such as Khan Market, Yashwant Place and various other locations in New Delhi Municipal Council (NDMC) area. BHEL to Set Up Electric Vehicle Charging Stations on Delhi-Chandigarh Highway.

The users will be able to book a slot for charging their vehicles at the station by using ElectriFi smartphone application. A top-up of 15 minutes is believed to be sufficient for a range of 22 Km which is likely to cost approximately Rs 30. However, a full charge is expected to be done in just 90 minutes.

On the initial stage, the government is planning to install up to 15kW Bharat DC-001 chargers that will be compatible with Electric vehicles from Tata and Mahindra, which includes two-wheelers and three-wheelers. Later on, the government is expected to update these stations with European CCS and Japan's CHAdeMO standards.

(The above story first appeared on LatestLY on Feb 11, 2019 07:21 PM IST. For more news and updates on politics, world, sports, entertainment and lifestyle, log on to our website latestly.com).