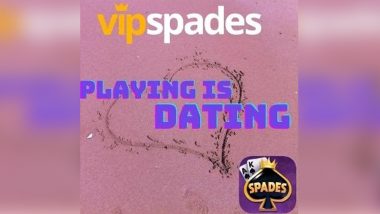 VIP Spades player Robert started talking to now soon-to-be-wife, Kylie, after meeting her in a tournament mode in VIP Spades.

A young couple is set to wed after meeting playing VIP Spades online. Robert got chatting to Kylie because she kept losing to her on the online game.

The players, both 25, then talked for four months before swapping phone numbers and meeting face to face. Their romance bloomed, and the couple is now getting married.

Kylie said, “I am playing a tournament on VIP Spades, and after the game, I received a message from a guy called “Edward_Cull.” It simply read, “Your play is awesome,” with a wink face emoji.

“More short messages followed that, so I decided to invite him to a group chat room, but he did not even talk. So, I decided to chat with him privately, and that’s when I discovered he also loved playing VIP Spades and that he is suffering from anxiety.”

“He did not have anybody to talk to, and I guess he believed he could trust me.”

Kylie lived in Orlando while Robert was in Tampa at the time. Hence, they used to meet at weekends.

Robert said, “Kylie says she hated the concept of online dating and never imagined she would end up with somebody she met on the internet.”

“I always saw the same username kept on beating me on the game. So, I sent her a message appreciating her playing skills. I never expected that I’d spend the rest of my life with somebody I met while playing a card game.

In just a few months, the two are considering finally tying the knot.

Kylie said, “I often visualized myself meeting my husband through my work or friends. I guess you never know who you are going to meet over VIP Spades. In my situation, it was my future husband. I could not be much happier with the man I will be marrying. Rob will do anything to make me happy, and I would do the same for him.”

Robert and Kylie’s relationship progressed usually. The game was still their hobby, something they did together or independently.

VIP Spades is a fifty-two-card trick-taking game, pretty much the same as Bridge and Hearths. Simple and free to play, you will find there a place for all types of players. Whether you are a long-time or a newbie player, there’s a place for everybody.

VIP Spades provide various types of rooms depending on the player’s level. You will also find a strong social element in the spades card game that makes it possible for everybody to communicate with other people from across the globe.