She herself is very determined as well. On her recent Tweet, she humbly said Completed 2200th surgery today! 2200 Lives Saved!, A small initiative I took 20 years back along with my brother Palash has now become the mission of my life! 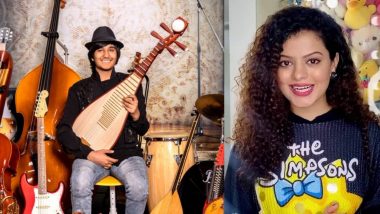 Neil Nayyar from India is a 14 year old boy who has made record with playing 107 musical instruments. Yes! You heard it right. A lad with tremendous talent and abilities to make you stand up and hail him for his enormous talent and instrumental skills. He is a one-of-a-kind artist one wouldn't want to miss watching.

It would also come as a surprise to his fans that Nayyar was featured by Palak Muchhal. She launched an episode series highlighting young talent featuring Neil naming, 'Aao Tumhein Chaand Pe Le Jaayein' on 21st Nov, 2020 Episode 2. The cause is to promote and support kids through these talented episodes and bring awareness to young generation which she is very passionate about.

Ace Bollywood Palak Muchhal entitled this young talent Neil Nayyar as a 'Wonderkid' in her episode 2. Good news surely on the way for his fans. As she always believed in keeping a mindset strong if one wants to achieve the goals. She herself is very determined as well. On her recent Tweet, she humbly said Completed 2200th surgery today! 2200 Lives Saved!, A small initiative I took 20 years back along with my brother Palash has now become the mission of my life!

Neil just at the age of 5 started playing instruments. His love for music is inevitable and extraordinary. The way he handles the instrumental tunes and make people engage in the same is something to watch out for. Just at the age of 12 Neil knew to play 44 instruments. With such competition in the music industry Neil surely had ace the talent game with his capabilities.

Music is an art and Neil is the artist as his way of understanding music is extravagant which makes him an exceptional musician. Neil also has been crowned as the world's greatest instrumentalist which in itself is a record. Neil has worked hard to achieve what he has and cherishes the same. Neil has teachers from all across the world. China, India, Italy and other parts of the world. He has taken his music lessons from guru's all across the world which also made him understand different cultures, knowledge and language.

Neil Nayyar will be soon releasing his first official album and music book for children in 2021. Excited much? Yes! This young talent will launch his first official International album which in itself in an inspiration for young talents from all across the globe who want to persuade their career in the music industry. Neil Nayyar truly is an inspiration for millions of kids out there who would want to achieve their goals in the musical industry.