Lenders of Reliance Naval and Engineering Ltd. (RNEL), which is undergoing debt resolution process under IBC, are set to face a haircut of whopping 90 per cent to 95 per cent, if the resolution plan of either of the two resolution applicants is accepted by them. 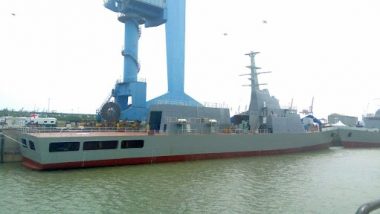 According to banking sources, the net present value (NPV) of the resolution plans submitted by both the shortlisted bidders is even less than the liquidation value of the company (RNEL) set by the resolution professional. Hazel- Swan consortium has offered to pay Rs 2,040 crore, while JSPL's bid is estimated around Rs 2,200 crore. Anil Ambani Resigns as Director of Reliance Naval and Engineering.

According to the source, the net present value of Hazel - Swan plan is estimated around Rs 1,200 crore and that of JSPL is around Rs 700 crore, which is less than the liquidation value of Rs 1,250 crore, set by the resolution professional of the RNEL.

The total debt admitted by the Resolution Professional of RNEL is Rs 12,400 crore. Hence, total recovery to the lenders under the Hazel- Swan plan is mere 9.8 per cent and JSPL plan is meagre 5.6 per cent.

The source quoted above said that the lenders are staring at a haircut of 90 per cent to 95 per cent, if either of the plans is accepted by them. Currently, the process of voting on the resolution plans is underway. The voting started on February 25 and is likely to end around March 10.

Hazel Mercantile has set up a special purpose vehicle (SPV) in partnership with Swan Energy, owned by Mumbai based businessman Nikhil Merchant. Swan holds 74 per cent stake in the SPV that has put in a bid for RNEL.

According to media reports, Nikhil Merchant was also a director on the board of the Navi Mumbai Smart City Infrastructure Ltd., which has defaulted on bank loans and those loans have been classified as a non performing asset (NPA) by the banks.

Merchant resigned from the board of this defaulter company much after submitting the resolution plan for RNEL, raising questions over his compatibility under 29A of IBC.

(The above story first appeared on LatestLY on Mar 06, 2022 02:17 PM IST. For more news and updates on politics, world, sports, entertainment and lifestyle, log on to our website latestly.com).