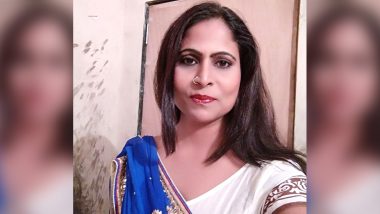 2020 doesn't seem to get any easier. After the shocking news of popular TV actor, Samir Sharma dying by suicide was reported on August 6, yet another disheartening news has now been reported as Bhojpuri actress Anupama Pathak is reported to have died by suicide in Mumbai. As per reports, the actress died by suicide on August 2 at her Dahisar residence. Before her death, Anupama in a Facebook post shared a video stating that it was financial reasons that are forcing her to take this step. Samir Sharma Dies By Suicide: Twitterati Shocked To Hear About Yeh Rishtey Hain Pyaar Ke Actor’s Death.

The actress in her Facebook post revealed two reasons that led her to take such a drastic step. She mentioned that Manish Jha had taken her two-wheeler during the lockdown in May when she was at her native place, and he refused to return the same after her Mumbai return. Further, she also stated that she had lost an amount of Rs 10, 000 which was invested in a production company in December 2019. Samir Sharma Dies By Suicide: Late Actor Was A Photography Enthusiast; Take A Look At Mumbai Through His Eyes.

Police are now investigating into Anupama Pathak's case and more details will come forward once the investigation is done. Pathak had starred in a few TV shows. This is second such incident to be reported on August 6 after Samir Sharma's death which has already left his colleagues and fans in a state of shock. We pray for Anupama's family to find strength in this trying time.

(The above story first appeared on LatestLY on Aug 06, 2020 08:14 PM IST. For more news and updates on politics, world, sports, entertainment and lifestyle, log on to our website latestly.com).