Ahead Of Valentine’s Day, Sonam Kapoor Shares An Unseen Pic With Anand Ahuja From Their New York Trip Where He Proposed To Her

Sonam Kapoor often shares pictures of her off screen life, especially with her hubby dearest. This time she has shared an unseen picture of her with Anand Ahuja that is from their New York trip that happened in 2017. 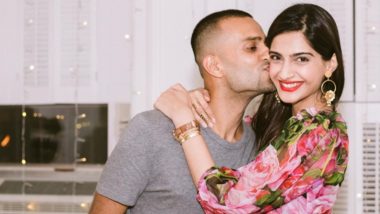 Sonam Kapoor and Anand Ahuja have not just been setting couple goals, but also some major fashion goals. The Bollywood actress often shares pictures of her off screen life, especially with her hubby dearest. This time she has shared an unseen picture of her with Anand that is from their New York trip that happened in 2017. Ahead of Valentine’s Day, India’s most trendy celeb has shared the sweetest picture post and it is endearing. Sonam Kapoor-Anand Ahuja Seal New Year With A Kiss! Actress Says, ‘2021 I’m Ready To Take You On With The Love Of My Life’.

Sonam Kapoor has recalled the moment, the most memorable day of her life. Through this mushy post on Instagram, she has revealed that it was during this New York trip that happened in August 2017 when Anand Ahuja had proposed her. She writes, “Throwback to a wonderful trip where my beautiful husband @anandahuja proposed to me #august2017 #newyork #everydayphenomenal”. But looks like Anand has something else to say. He posted a comment on his wifey’s post that read, “A few weeks after this! This was the bday party you threw for me.” Well, no matter what, this indeed the perfect time to share all the lovely throwback moments.

Sonam Kapoor and Anand Ahuja tied the knot on May 8, 2018 in Mumbai. It was a traditional Sikh ceremony, followed by a grand wedding reception that was attended by B-town A-listers.

(The above story first appeared on LatestLY on Feb 02, 2021 09:11 AM IST. For more news and updates on politics, world, sports, entertainment and lifestyle, log on to our website latestly.com).