Ala Vaikunthapurramuloo Hindi Remake With Kartik Aaryan In Lead To Go On Floors In February 2021?

The Telugu film Ala Vaikunthapurramuloo starring Allu Arjun and Pooja Hegde in the lead hit the big screen on January 12 this year. This Sankranthi special release directed by Trivikram Srinivas turned out to be a blockbuster. 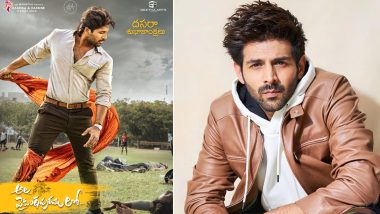 The source was quoted as saying, “Before the lockdown, Kartik had been approached for the role of Bantu, which was played by Allu. The role is apt for Kartik, who is also a good dancer. The deal was apparently finalised on Thursday, and Kartik will film for it after he wraps up Bhool Bhulaiyaa 2 and Dostana 2. The movie will roll in early 2021.” Let’s wait for an official announcement from the makers!

(The above story first appeared on LatestLY on Jul 27, 2020 11:23 AM IST. For more news and updates on politics, world, sports, entertainment and lifestyle, log on to our website latestly.com).