Now that he misses those days, he posted a bunch of pictures from this meet and greet session. 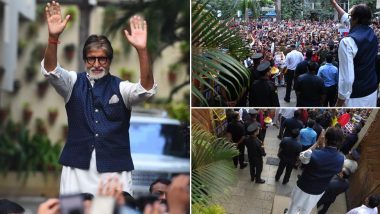 Amitabh Bachchan has always fans with his social media posts. The Shahenshah of Bollywood is pretty much active on these platforms to stay in touch with his admirers. But that's not the only place where he meets his fans. He also met and waved them outside his residence, Jalsa, every Sunday in the pre-lockdown phase. Now that he misses those days, he posted a bunch of pictures from this meet and greet session. India-China Border Issues: Amitabh Bachchan Posts a Heavy Yet Heartfelt Tribute for the Martyred Soldiers (View Tweet).

Very humbly, he wrote in his tweet that he does not want to get famous but is satisfied with the fact that people do know him! The tweet reads as, "T 3568 -' मशहूर होने का शौक़ नहीं मुझे ; आप मुझे पहचानते हैं बस इतना काफ़ी है ' ~ HRB." In the snaps, he is seen greeting a sea of fans who stand outside his residence just for a single glimpse of the megastar in real life. Here are the pictures.

On the other hand, the actor recently received heaps of praises for his work in Shoojit Sircar's Gulabo Sitabo. He co-starred with Ayushmann Khurrana for this slice-of-life film that was released on Amazon Prime. He had earlier worked with the director in films like Pink, Piku and Shoebite (unreleased). Next, he will be seen in Ayan Mukerji's Brahmastra, starring Alia Bhatt and Ranbir Kapoor in the lead.

(The above story first appeared on LatestLY on Jun 20, 2020 08:31 AM IST. For more news and updates on politics, world, sports, entertainment and lifestyle, log on to our website latestly.com).