Anurag Kashyap explains what happened the last time he tried to play peacemaker between the ladies and why he won't try to sort out things between them. 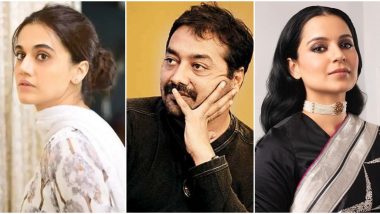 Kangana Ranaut targeted Taapsee Pannu in her recent interview where she tagged her as a B-grade actress. The Badla actress was clearly disappointed after hearing her statement and decided to hit back through her interaction with Hindustan Times. Taapsee insisted that Kangana and her sister have always been discrediting her hard work and this is a form of mental harassment if nothing else. Anurag Kashyap who was once close to both the actresses later tweeted in Taapsee's favour where he wrote he doesn't know the new Kangana. The director has now revealed how once tried to play a peacemaker between the ladies but he won't attempt it again in the future. Taapsee Pannu Takes a Sly Dig at Kangana Ranaut Calling Her a B Grade Actress, Here's What She Said.

Kashyap recently spoke to NDTV about his recent series of tweets and elaborated on how Kangana was hurt by one of his and Taapsee's comments in an older interview. "Kangana was hurt by that. I am saying okay if you are hurt by that, I will apologize for that. That's what friends do. But she has gone on to a mode where 'If are not with me you are my enemy'." When asked why he isn't texting Kangana as he did previously to sort out their recent issues, the filmmaker recalled his previous experience saying, "Taapsee is also a friend and I said that two friends are there and why are they saying things to each other... I called her (Kangana) and asked her and she put the whole conversation on social media and I was just there like a friend trying to sort things out."

Earlier Kangana's sister, Rangoli, before her Twitter account was suspended had called Taapsee a 'sasti-copy' of Kangana and when Anurag had tried to sort out their differences, Chandel revealed that Anurag had called Kangana to smooth things over. This is probably what Kashyap was referring to when he meant his previous experience. Taapsee Pannu Won't Apologise to Kangana Ranaut: 'Why Should I Pay Attention to People Who Do Not Matter to Me?'

"It is all becoming so accusatory", Kashyap said when asked about Kangana calling Taapsee and Swara as as "chaploos" or sycophants. While Ranaut has never worked with Taapsee in the past, she has shared the screen space with Swara in Tanu Weds Manu and  Tanu Weds Manu Returns.

(The above story first appeared on LatestLY on Jul 23, 2020 08:36 AM IST. For more news and updates on politics, world, sports, entertainment and lifestyle, log on to our website latestly.com).