Arjun Rampal: I Was NOT Ready To Play The Lawyer Who Defends A Serial Child-Killer!

Arjun Rampal plays Sid Jaisingh who feels that the accused who is believed to have murdered 38 children is innocent. Those who have seen the trailer will swear by the chilling reality and the various twists of the story this movie is based on. 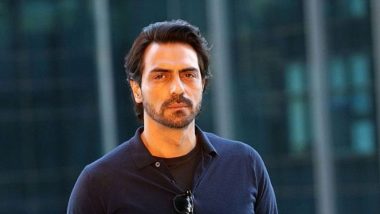 Arjun Rampal, who will complete 20 years in Bollywood this year, is happy with his evolution as a performer and the kind of roles that come his way. In his latest venture, the film streaming on ZEE5, titled Nail Polish, the model-turned- actor plays a defence lawyer with a formidable stance. Rampal plays Sid Jaisingh who feels that the accused who is believed to have murdered 38 children is innocent. Those who have seen the trailer will swear by the chilling reality and the various facets of the story this movie is based on.

For the uninitiated, The Nail Polish showcases a high profile lawyer, played by Arjun Rampal, and a man struggling in an asylum, played by Manav Kaul. The film revolves around a murder trial where the back story and the court proceedings are interwoven into a journey of a shocking criminal discovery. In his exclusive chat with LatestLY, Rampal confessed that he was not ready to play the character initially. And the reason for his hesitation was quite obvious. Arjun Rampal Wishes a Happy New Year to His ’Wonderful’ Instagram Family. Shares the Lessons Learned in 2020

"How could I defend someone who has been accused of killing 38 small innocent children, especially when I have a small baby in the real world. No way I was going to say yes to the project, even though the makers of Nail Polish kept stressing that this role was tailor-made for me. But in the end I thought it was bizarre as how could I get my head wrapped around this drama and switch from the headspace I am in (on the home front) to that headspace where I am required to play this lawyer!" explains Arjun. Arjun Rampal Praises Nail Polish Co-Star Manav Kaul, Says ‘Acting with Him Gave Me Goosebumps’

Arjun adds that before deciding to take up this project, he spoke with various lawyers, including g his uncle from Jamshedpur who is a lawyer by profession as well. " I questioned them. I was like how could one even touch such cases! And everybody said unanimously that till proven guilty, every accused is innocent. And that became my belief system and that in turn gave me the strength to play the part." maintains Arjun.

"Now that's what character-building process is all about. I portrayed the character with my absolute faith and conviction. So much so that I refused to read the last four pages of the script, as I did not want to know the verdict and draw any conclusion for that would have hampered what I believed in while playing the defence lawyer," he concludes.

(The above story first appeared on LatestLY on Jan 04, 2021 02:52 PM IST. For more news and updates on politics, world, sports, entertainment and lifestyle, log on to our website latestly.com).