Ashok Kumar would have been 109 years old today but did you know he stopped celebrating his birthday since 1897? There's a huge reason behind it, something that will break your heart as it perhaps did for Ashok Kumar. 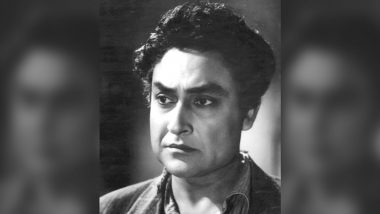 Ashok Kumar or more fondly and famously known as Dadamoni would have been 109 years old had he been alive. One of the most prolific actors in Indian cinema, the legend has seen a lot of shifts in the industry as his career began a little after the talkie movement and continued till 1997. He is often referred to as the first superstar of Indian cinema. He is one of the immensely loved actors of this country and his roles had made him a household name as well. Whether he is the Jewel Thief or prankster man of the house in Khoobsurat, we have always felt a sudden sense of warmth every time we watched him onscreen. That endearing smile was heart-touching. He is also the original rapper of Indian cinema after he sang 'Rail gaadi.' But did you know he stopped celebrating his birthday since 1897 and the reason is Kishore Kumar? Bappi Lahiri Reminisces Working with Kishore Kumar on Legendary Singer’s Last Song That Was Shot in Mehboob Studio

Dadmoni were four siblings. He was the eldest followed by his sister Sita Devi who was married to Sashadhar Mukherjee, second brother Anoop Kumar and the youngest Kishore. Dadamoni had outlived all his siblings and when Kishore Kumar died in 1987 on his birthday, he quit celebrating his special day. Till his demise in 2001, he stayed away from being festive on his birthday.

Chalti Ka Naam Gaadi, a home production, had all the brothers together and the camaraderie they shared on-screen is perhaps exactly how they were in real life. We can only imagine the hurt he may have felt to lose his sibling on his special day.

(The above story first appeared on LatestLY on Oct 13, 2020 08:30 AM IST. For more news and updates on politics, world, sports, entertainment and lifestyle, log on to our website latestly.com).