Atlee Kumar is making waves in Bollywood now with his debut film here and that too with Shah Rukh Khan. While he or SRK is yet to confirm the same, we have five other rumours that we hope and pray are true as well. 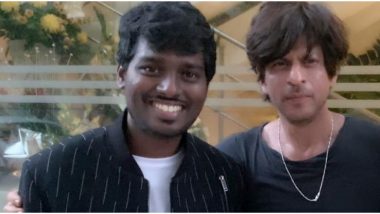 Atlee Kumar is easily one of the brightest and also luckiest filmmakers of India. He started his journey as an assistant director on the sets of Rajinikanth and Aishwarya Rai Bachchan's Enthiran and also Shankar's Nanban before debuting as a director. So far, the man has made four films and all have been successes. Be it his debut film Raja Rani or the hattrick hit with Vijay (Theri, Mersel and Bigil), the director has managed to win over everyone. Now, he has moved to the Bollywood league and is directing his first Hindi film with none other than Shah Rukh Khan. But what's more interesting here is that nothing has been confirmed! Atlee Kumar Birthday: Theri, Mersal – Here’s Where To Watch Films Of This Kollywood Director Online!

You read it right! Atlee hasn't even confirmed if Shah Rukh Khan is truly working with him. People made guesses by spotting their pictures together until SRK's manager's Insta story saw her on the sets of Atlee's movie. But on his birthday today, let's talk about the rumours we truly hope are true.

A letter by Sun Day seeking permission to shoot at a location in Pune went viral recently which had the film titled Lion. Now, nobody knows if it's a working title or that actually is the name or the letter is fake altogether.

As per this letter, #ShahRukhKhan's next with director #Atlee film name is #Lion.#Nayanthara #Priyamani pic.twitter.com/HBCLG4IncX

Rumours abound that Nayanthara will play the role opposite Shah Rukh Khan in the film. Now that will be a casting coup if it's true. The last time we saw them together was for an anthem for the Hockey World Cup 2018. While they didn't share the frame, they were part of the song which makes us believe they would look good together.

Given the kind of camaraderie and success rate Atlee shares with Thalapathy Vijay, it is only obvious to assume the actor might have a cameo in the film. Now that would be incredible. Vijay had a cameo in a song in Salman Khan's Wanted, so we really hope it happens for SRK as well.

There are also rumours that Priyamani and Yogi Babu will play important roles in Atlee's next with SRK. Now that would be amazing to watch after Chennai Express where all three shared screens with each other. Before Atlee’s Film, Shah Rukh Khan Played Double Role of Father and Son in This ’90s Flick

Well, we don't really have good experience of Shah Rukh in double roles in movies but this rumour sounds promising. A Mumbai Mirror report last year claimed that he will be seen as an investigating officer and a criminal. As long as he doesn't ham his way like Duplicate, we have a feeling this can be a fantastic proposition.

(The above story first appeared on LatestLY on Sep 21, 2021 08:20 AM IST. For more news and updates on politics, world, sports, entertainment and lifestyle, log on to our website latestly.com).