Ranbir Kapoor reuniting with Deepika Padukone and Alia Bhatt for a project is a dream that only Sanjay Leela Bhansali can manage to accomplish. 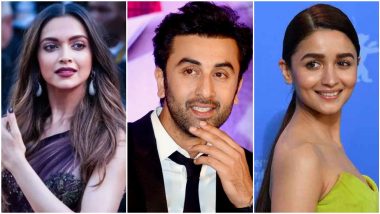 If this happens, it will be the biggest casting coup of recent years in Bollywood. Ranbir Kapoor reuniting with Deepika Padukone and Alia Bhatt for a project is a dream that only Bhansali can manage to accomplish. While these are initial, source-based reports and there's no official confirmation on it yet, let's hope the rumours turn into positive announcements and we get to see this talented trio perform magic on the big screen. As per new reports, SLB is excited to have his muses Deepika and Alia come together for Baiju Bawra and with Ranbir's addition, the excitement will only go a notch higher. Sanjay Leela Bhansali Says 'Baiju Bawra' My Biggest Challenge as Composer.

Speaking about the possibility, a source close to the project in his conversation with Pinkvilla said, "It's a story of four characters - two heroes and two heroines. For both the heroines, SLB has decided to go with his current favourites Deepika Padukone and Alia Bhatt. He has narrated the script to both of them and they have both loved their parts. In all probabilities, Alia will be paired opposite Ranbir's Baiju in the film, stepping into Meena Kumari's shoes from the original. Deepika will play the other female lead, that of dacoit Roopmati essayed by Kuldip Kaur in the 1952 drama. Both the actors will be Ranbir's romantic interests in the period saga and have shown a keen interest in the project. If this materialises, this will be a big casting coup for sure."

Coming to the other lead actor, the source revealed the director is already in talks with two big superstars to come on board. "The movie revolves around the characters of Baiju and Tansen and the conflict between the two. For Baiju's character, Ranbir has almost been finalised. The paperwork is yet to be done but SLB has already discussed the film with the actor and he's liked the script. For Tansen's role, they need a much older actor," explained the source. Baiju Bawra: Ranbir Kapoor Should Collaborate with Sanjay Leela Bhansali for his Most Ambitious Project, think Fans.

The remake of the 1952 movie will have almost a dozen songs and we can expect another melodious album from the director. He isn't locking in Ranbir's dates yet as he's still hunting for his second lead. Once things fall in place, the team will officially announce its star cast and the project will go on floors in the second half of 2021. Bhansali will finish working on Alia Bhatt's Gangubai Kathiawadi and then start working on his next much-ambitious project.

(The above story first appeared on LatestLY on Oct 18, 2020 10:02 AM IST. For more news and updates on politics, world, sports, entertainment and lifestyle, log on to our website latestly.com).