Before Dunki, Did You Know Shah Rukh Khan Nearly Worked With Rajkumar Hirani in Munna Bhai MBBS and 3 Idiots? Here’s What Happened!

Now finally, Shah Rukh Khan fulfilled his wish to work with the blockbuster-maker with Dunki, also starring Taapsee Pannu, releasing in theatres on December 23, 2023. Whether that film will be a blockbuster or not, only Time and Luck can say! 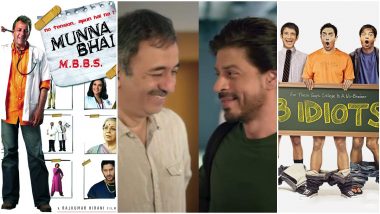 Shah Rukh Khan finally announced his new movie with Rajkumar Hirani on April 19. Titled Dunki, the makers dropped a quirky title announcement teaser, featuring the actor and the director. Reportedly a social comedy that deals with illegal migration, Dunki has commenced shoot earlier this month and has also confirmed Taapsee Pannu as the female lead. Rajkumar Hirani is one of the rare directors in Bollywood who can boast of a 100% success rate, with each of his films a bigger hit than the previous one. His last release Sanju was a Rs 300 crore blockbuster. Dunki: Taapsee Pannu Elated to Play the Female Lead Next to Shah Rukh Khan in Rajkumar Hirani Directorial.

With Dunki, this is the first time both Taapsee and Hirani are working with Shah Rukh Khan directly. Taapsee had earlier acted in King Khan's production, Badla that was directed by Sujoy Ghosh and co-starred Amitabh Bachchan. As for Hirani, both he and SRK nearly came working together in two of his movies, that were later made with other stars and turned out to be huge box office successes. Shah Rukh Khan’s Dunki To Clash With Akshay Kumar-Tiger Shroff’s Bade Miyan Chote Miyan at Box Office in December 2023!

The first film was also the movie that turned Hirani, who was an FTII trained editor, into a director and gave his breakout success - Munna Bhai MBBS. Not many know that it was Shah Rukh Khan who was first roped in to play the titular lovable goon turned medical impersonator. Sanjay Dutt, who went on to play the same role later on, was instead cast in Jimmy Shergill's role. However, as per reports, King Khan's injury during the shoot of Shakti: The Power was a deterrent for him to bring the required physical attributes for the role, and it was he who recommended Sanjay Dutt in his place. The rest, they say, is history with the director repeating Dutt and his Munna Bhai in the sequel Lage Raho Munnabhai, which turned out to be a bigger commercial and critical success.

At least people parted ways on a good note after Munna Bhai MBBS. Which wasn't the case the second time, Khan and Hirani nearly came together. Before Aamir Khan became Rancho/Phunsukh Wangdu in 3 Idiots, the hugely successful adaptation of Chetan Bhagat's novel Five Point Someone, it was Shah Rukh Khan who was eyeing that lead role. He was to produce the movie with Hirani set to direct. Shah Rukh Khan’s Swades, Aamir Khan’s 3 Idiots, Shahid Kapoor's Kabir Singh and More - 20 Amazing Little Details About Your Fave Hindi Movies That Will Make You Watch Them Again!

However, as per reports, Hirani's once-frequent collaborator and producer Vidhu Vinod Chopra mocked Khan's Paheli which was sent to Oscars as India's entry that year, and then accused the superstar of hijacking the director for his banner. Khan parted ways with Hirani citing date issues, who later made 3 Idiots under the banner of VVC Films, and with Aamir Khan, and the movie was a huge blockbuster. Hirani and Aamir went on to make another film - PK that was a satire on blind religious beliefs, and it turned out to be a bigger success.

Now finally, Shah Rukh Khan fulfilled his wish to work with the blockbuster-maker with Dunki releasing in theatres on December 23, 2023. Whether that film will be a blockbuster or not, only Time and Luck can say!

(The above story first appeared on LatestLY on Apr 19, 2022 05:56 PM IST. For more news and updates on politics, world, sports, entertainment and lifestyle, log on to our website latestly.com).