Bell Bottom released in limited screens and under strict guidelines. The film has so far collected over Rs 12 crore in its four day opening weekend. While these are promising numbers, trade experts are not too kicked about them 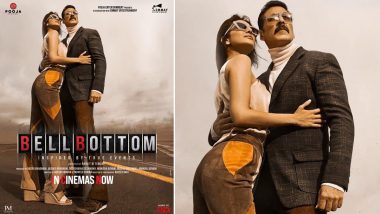 The Hindi film industry hailed Akshay Kumar and Vashu Bhagnani's brave move to release Bell Bottom at the theatres despite several constraints. With the fear of a third wave of COVID-19 looming at large, many states have allowed the opening of theatres but with several SOPs in place.  Maharashtra hasn't even permitted the same. So Bell Bottom released in limited screens and under strict guidelines. The film has so far collected over Rs 12 crore in its four day opening weekend. While these are promising numbers, trade experts are not too kicked about them. Akshay Kumar Misses ‘Ratlam Ki Galiyan’; Bell Bottom Star Reminisces About His Childhood Memories As He Steps Out in London Post Quarantine

We got in touch with Girish Johar, Trade expert and film producer, to throw some light on what according to him happened to Bell Bottom at the box office. He is of the opinion that the film could have earned a bit more but he understands the circumstances are too unusual to say anything.

"These definitely are unusual and new circumstances. It has definitely affected the collections of the film. Having Maharashtra onboard would have helped here," opines Johar. He also feels that the movie needed a little more promotions in terms of creating awareness around the fact that it is safer to watch the movie in the theatres.

Johar is a bit disappointed with the overseas collection of Bell Bottom as well. "Overseas wasn't that great. I was hoping that would work for the film as Akshay Kumar is quite popular yet the desired result was not achieved," Johar shares. Reports suggest Bell Bottom has earned US$ 800,000 (Rs 6 Crs) from the overseas market.

Another trade expert who didn't wish to reveal his identity told LatestLY, "We were expecting a little more business. A four-day total of Rs 20 crore could have been achieved because it had everything from a huge superstar like Akshay Kumar, an interesting premise, a classy look and feel and a solo release."  Bell Bottom: Make-Up Artist Vikram Gaikwad Opens Up on Transforming Lara Dutta As Indira Gandhi in the Upcoming Film

(The above story first appeared on LatestLY on Aug 24, 2021 04:32 PM IST. For more news and updates on politics, world, sports, entertainment and lifestyle, log on to our website latestly.com).