Eversince Sushant Singh Rajput's death was connected to him being depressed, people on social media have been targeting Karan Johar for ostracising him. So will this impact Sooryavanshi and Brhamastra's box office outcomes? 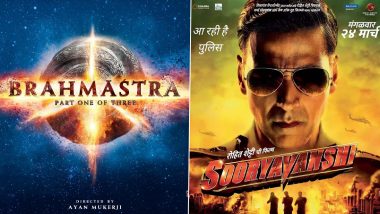 Sushant Singh Rajput's decision to end his life has left everyone with so many questions especially because he left behind no note. People aren't able to wrap their heads around his sudden death and that gave rise to a series of blame-game. Many celebrities expressed shock on Twitter regarding the actor's demise and one of them was Karan Johar. The director had tweeted that the news is heartbreaking and now all he is left with is memories. But people on social media for some weird reason and without evidence decided that Sushant was in depression because of people like Karan Johar who also invests in star kids. Nepotism again became the trending word. So the question is would this negative trending effect Karan's upcoming movies like Sooryavanshi and Brahmastra? From Akshay Kumar’s Sooryavanshi to Ranbir Kapoor’s Brahmastra, 7 Films of 2020 That Should NOT Follow Gulabo Sitabo’s OTT Strategy and Must Release in Theatres – Here’s Why

We spoke to our Trade Expert Girish Johar, who doesn't believe this will impact the box office outcomes of Sooryavanshi and Brahmastra whenever they release. "Mostly the buzz of a film starts when you have the marketing elements out in the public domains, for example, images, trailers, or posters. Once that starts trickling in, the excitement levels build up. By the time that happens, I don't think people would remember whatever is happening, especially the negative trending." He further added that it is more of a social media thing. "A large part of India's theatre-going audience is hardly on social media. Honestly, I feel there won't be much issue. People will decide after watching the trailer whether to check out the film or not," opines Johar.

(The above story first appeared on LatestLY on Jun 24, 2020 01:52 PM IST. For more news and updates on politics, world, sports, entertainment and lifestyle, log on to our website latestly.com).