Deepika's Cannes bio calls the Vin Diesel actioner as her English Language debut, when in fact Deepika had made her debut in that language three years before, along with Arjun Kapoor. 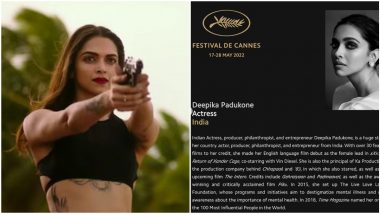 Deepika Padukone just made Indian cinema proud when she was chosen to be a part of 75th Festival De Cannes or Cannes 2022 nine member jury. Headed  by French actor Vincent Lindon, the jury also consists of popular celebs like actors Rebecca Hall, Noomi Rapace, and filmmakers Asghar Farhadi, Jasmine Trinca, Ladj Ly, Jeff Nichols, and Joachim Trier. They will chose the film that will be awarded Palme D'or award, the highest honour at Cannes, on the closing night. Quite a prestigious panel to be on! Cannes 2022: Deepika Padukone To Be a Part of 75th Film Festival Jury.

So the film is question is Finding Fanny, a road trip dramedy that was directed and written by Homi Adajania and produced by Dinesh Vijan under Maddock Films. The movie also starred Arjun Kapoor, Dimple Kapadia, Naseeruddin Shah, Pankaj Kapur while Deepika's hubby Ranveer Singh had a blink-n-miss cameo appearance. The film was praised for its zany plotline and the performances of the cast.

Check Out the Trailer of Finding Fanny:

Finding Fanny has characters mostly conversing in English, with a smattering of Hindi and Konkani. Even the movie's Wiki page calls it an 'English-language' film. So there's that!

So while we are totally happy that Deepika got to go beyond her regular red carpet outings at Cannes and be part of its jury, is it wrong for us to expect whoever wrote her bio to get facts about her properly?

(The above story first appeared on LatestLY on Apr 27, 2022 08:31 PM IST. For more news and updates on politics, world, sports, entertainment and lifestyle, log on to our website latestly.com).