When Deepika Padukone rated the late star Sushant Singh Rajput the ultimate in the acting department. Read and watch. 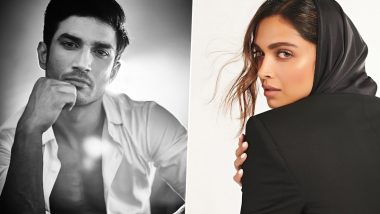 Sushant Singh Rajput's death news shocked one and all. As soon as this piece of tragic news broke online, the actor's fans and close industry pals mourned the loss and offered condolences to the family. Sushant died by suicide and was reportedly suffering from depression from the past six months. Before making it big in Bollywood, the late star was a well-known face from television. Sushant passed away on June 14, and even after seven days, his fans are expressing grief and are sharing throwback videos in memory of the star. Now, a clip of Deepika Padukone lauding SSR has gone viral. Sushant Singh Rajput Suicide: Case Filed Against Actor’s Rumoured Girlfriend Rhea Chakraborty in Bihar.

The video happens to be from a talk show in which when the host quizzes the Padmaavat beauty about who would she rate high in performance. To which, Deepika replies, "I really like Sushant." Well, while the viral clip might be old, we cannot deny the fact that DP has acknowledged Sushant as a terrific performer. FYI, Padukone was part of Sushant's film Raabta (2017) in which she appeared just for a song. Sushant Singh Rajput Demise: President of All India Web Media Association Claims Like Chhichhore Actor, There Are Other Bollywood Stars Under Mental Stress.

Check Out The Viral Video Featuring Deepika Padukone Below:

While Deepika has not yet directly mourned the loss of Sushant. She has been posting this 'repeat after me' series on her social media in which she talks about depression. Through these posts indirectly, she wants to say that don't go the suicide way (like Sushant), but seek help when under mental stress. Stay tuned!

(The above story first appeared on LatestLY on Jun 21, 2020 04:24 PM IST. For more news and updates on politics, world, sports, entertainment and lifestyle, log on to our website latestly.com).