Saif's short but beautiful role did not go unnoticed and netizens were all hearts for it. Here, check some of the tweets that comment on Saif Ali Khan's role in the movie. 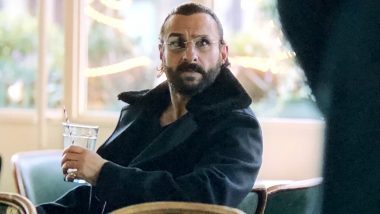 Sushant Singh Rajput's last film, Dil Bechara has finally released on Disney+ Hotstar. The Mukesh Chhabra directed movie, with Sanjana Sanghi as female lead has moved everyone to the core. The fans watched Sushant's last screen presence with a heavy heart and were left in tears with his amazing lively performance and emotional story. However, the netizens have not forgotten to give appropriate credits to other actors as well and one of them is definitely Saif Ali Khan. Dil Bechara: 7 Moments in the Film Featuring Sushant Singh Rajput That Made You Laugh With Him, Cry for Him and Cherish Him Forever! (SPOILER ALERT).

In case you don't know already, Saif has a cameo in the movie, as revealed way before the movie released. Him sharing the screen space with the late actor has blown away the fans' minds. Saif's short but beautiful role did not go unnoticed and netizens were all hearts for it. Here, check some of the tweets that comment on Saif Ali Khan's role in the movie.

Can not miss to appreciate the best cameo by anyone so far !

More On The Cameo

Every scene and every dialogue of this movie looks related to him its like someone giving him tribute by sharing his journey. Emotional rollercoaster ride as you clean your wet eyes another scene comes to make it wet again.

We all joke about things we don't want to talk about. Don't we?#DilBechara #abhimanyuveer #SaifAliKhan

I'm going to be honest, the best part of #DilBechara for me was when #SaifAliKhan made his cameo. Not only was it incredible acting, he was also delivering a powerful message.

The film also marks as the debut of Sanjana Sanghi as a lead actress. The celebs in the industry came forward to promote the film unanimously, to watch the star 'for one last time.' Sushant Singh Rajput died by suicide on 14 June 2020, in his apartment in Bandra, Mumbai. Police investigation is underway regarding his death case.

(The above story first appeared on LatestLY on Jul 25, 2020 08:49 AM IST. For more news and updates on politics, world, sports, entertainment and lifestyle, log on to our website latestly.com).