Even before Kiran Rao worked as an assistant director on the sets of Aamir Khan's Lagaan, she had a one-minute supporting role in his other release, Dil Chahta Hai. 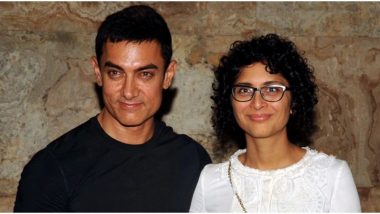 Who hasn't seen Dil Chahta Hai? We all have, right and just in case you haven't yet, we suggest you find yourself a place in hell. This Farhan Akhtar directorial that probably helped Goa boost its tourism should also be credited for giving Saif's filmy career a new lease of life. The actor was sceptical to come on board but eventually agreed when Dimple Kapadia convinced him to. A beautiful tale of love and friendship, the movie still warms our hearts even after 19 years of its release. Dil Chahta Hai Completes 19 Years: Farhan Akhtar Pays Tribute to the Iconic Movie By Sharing Popular Dialogues of Aamir Khan, Akshaye Khanna and Saif Ali Khan! (View Tweet).

The film will always hold a special place in Saif's heart and a rather prominent one for Aamir's. For the ones who don't know, his wife, Kiran Rao was also a part of it. No, she wasn't in the film's crew but its casting in fact. Besides working as an assistant director on Aamir Khan's Lagaan, Kiran also had a minute-long supporting role in Dil Chahta Hai. Interestingly, she played Deepa's (Samantha Tremayne) friend, the girl who was madly in love with Aamir's (Akash) character. Probably that's how the duo got to know each other. The couple eventually got married in 2005 after he divorced his former wife in 2002. Dil Chahta Hai Completes 19 Years: Why Farhan Akhtar’s Film, Starring Aamir Khan, Akshaye Khanna and Saif Ali Khan, Continues to Remain THE Defining Movie on Friendship.

The Scene with Kiran Rao! Yes, Aamir Is a Part of It Too

Since her acting debut in 2001, the actor in her has prefered taking a back seat while the director and producer in her continue to dominate. Kiran's directorial attempt, Dhobi Ghaat was quite impactful and it certainly earner her enough praises. Speaking of directorial attempts, we would love to see Farhan Akhtar stepping into his old director's shoes once again. It's been a while since he has announced any new directorial project and think it's time he starts juggling between his two passions. Over to you Farhan!

(The above story first appeared on LatestLY on Aug 10, 2020 06:26 PM IST. For more news and updates on politics, world, sports, entertainment and lifestyle, log on to our website latestly.com).