Diljit Dosanjh Joins the Farmers’ Protest at Singhu Border, Lends a Massive Support to the Cause (Watch Video)

Actor and singer Diljit Dosanjh who has been quite vocal on social media about his stance for the farmers' amid the ongoing protests have now lent massive support by joining the protest at Singhu border. Check it out. 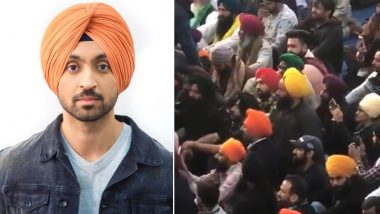 Actor and singer Diljit Dosanjh have been grabbing a lot of headlines these days due to his online tiff with Kangana Ranaut. Their Twitter war started after Kangana misunderstood an elderly woman amid the farmers' protest as Shaheen Bagh's Bilkis Bano. However, the fight did start on that note but ended with name-calling and whatnot. Now, that's quite an old news, as we recently bumped into a video online which sees Diljit at the farmers' protest at Singhu border, Delhi. The Punjabi singer has been quite vocal about his support for the farmers and well his latest gesture is applaud worthy and how. Diljit Dosanjh’s Twitter War With Kangana Ranaut Over Farmers’ Protests Inspires Netizens to Come Up With Funny Memes and Jokes (View Tweets).

In the clip, Diljit can be seen joining the farmers' who are protesting against the government's passed farm bills. It is from day one of the protests that the singer has been showing quite a support for the farmers of the nation. Right from sharing their plight amid the chaos to boosting their spirit, he has done it all. But after seeing him at the protest, Diljit nein dil jeet liya for sure. Diljit Dosanjh, Sonu Sood, Richa Chadha and Others Extend Their Support to the Protesting Farmers (View Tweets).

Check Out Video Below:

"We have only one request to Centre..please fulfil the demands of our farmers. Everyone is sitting here peacefully & entire country is with farmers," he says pic.twitter.com/H5ax67QsBX

Well, we hope after looking at Diljit, many more stars also join the farmers in their war against the law as it counts. The farmers are protesting against the two passed bill which allows them to sell their produce outside the Agricultural Produce Market Committee. However, they think it is the government's way to take away MSP. Stay tuned!

(The above story first appeared on LatestLY on Dec 05, 2020 05:59 PM IST. For more news and updates on politics, world, sports, entertainment and lifestyle, log on to our website latestly.com).