Diljit Dosanjh Shares a Heart Wrenching Picture of a Farmer, Calls Out People Who Are Dehumanising the Protesters And Calling Them Terrorists (View Pic)

Earlier Kangana had taken a dig at Diljit saying that he has suddenly disappeared after raising his voice in support of protesting farmers. Diljit gave it back to her in a very subtle manner. 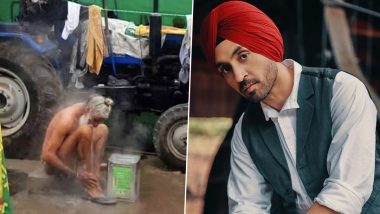 While Kangana Ranaut has been unapologetically bashing Diljit Dosanjh and Priyanka Chopra for supporting the farmer's protest, the Punjabi singer is making every effort to humanise the whole incident. He has been talking about his views on social media very openly and often shares pictures of farmers to make people understand their plight. The actor has shared yet another heart-wrenching photo of a farmer with a beautiful caption. Diljit Dosanjh Vs Kangana Ranaut Leads To Twitterati Uniting For Translations Of Udta Punjab Actor's Savage Punjabi Tweets.

The photo that Diljit has posted shows an old man taking a bath. There is a tractor in the background and Diljit captioned the image beautifully. He wrote, "Terian Tu Janey Baba. Eh Rab Lok Ena Nu Terrorist Lagde Ne. Insaniyat Naam Di V Koi Cheez Hundi aa Yaar." He questioned everyone who has tagged the protestors as a terrorist and not simply are able to see the innocence of it.

Earlier Kangana had taken a dig at Diljit saying that he has suddenly disappeared after raising his voice in support of protesting farmers. Diljit gave it back to her and had tweeted, “Don’t even think that I have disappeared. Who gave her the authority to decide who is a patriot and who is an anti-national? Who made her the authority? Have some shame before you label farmers as anti-nationals.” Diljit Dosanjh’s Twitter War With Kangana Ranaut Over Farmers’ Protests Inspires Netizens to Come Up With Funny Memes and Jokes.

Diljit and Kangana’s Twitter spat began earlier this month. Kangana in a now-deleted tweet had claimed that Bilkis Banno from the Shaheen Bagh protests was making a business out of the protests. She said that the Shaheen Bagh dadi was available to take part in any protest for mere 100 rupees. Diljit slammed Kangan for sharing incorrect information and took a stand for the farmers.

(The above story first appeared on LatestLY on Dec 17, 2020 11:22 AM IST. For more news and updates on politics, world, sports, entertainment and lifestyle, log on to our website latestly.com).