Once again, the fans were drooling over this much-loved pair in the comments section below. 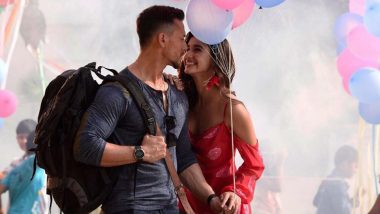 Tiger Shroff and Disha Patani starrer Baaghi 2 completes 2 years today! The action film helmed by Ahmed Khan had managed to attract the audience. The sequel was even more special than the Shraddha Kapoor starrer Baaghi, as it had real life lovebirds, Disha and Tiger. Even though they deny their relationship over and over again, the fans are damn sure they indeed the IT couple of the town. The actress also shared a mushy post of them on completion 2 years of Baaghi 2.

In her Instagram post, we can see the duo having romantic moment in the film. Disha looks chic in a red attire and Tiger flaunts his well-toned body. Once again, the fans were drooling over this much-loved pair in the comments section below. Check out the post below.

Tiger was also recently seen in Baaghi 3, alongside Shraddha Kapoor. Disha Patani had a cameo in the same. However, the movie was panned by the critics and audience was not impressed with it either.

Despite all that, fans do root for Disha-Tiger's on-screen, off-screen chemistry. In fact, Disha recently grabbed headlines as she posted a quarantine video dancing with Tiger's sister, Krishna Shroff. The video was a hit on the internet. Disha will be next seen in Radhe: Your Most Wanted Bhai. On the other hand, Tiger will be next seen in Heropanti 2.

(The above story first appeared on LatestLY on Mar 30, 2020 04:51 PM IST. For more news and updates on politics, world, sports, entertainment and lifestyle, log on to our website latestly.com).