Dussehra 2020: Shah Rukh Khan Extends Wishes to His Fans, Reflects on the Triumph of Good Over Evil!

Bollywood actor Shah Rukh Khan took to social media and wished his fans a 'Happy Dussehra'. Check it out. 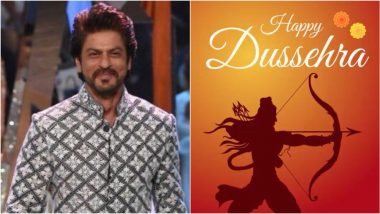 Currently, the entire country is soaked in the festive mood. As on October 25, 2020, Indians all over the world are celebrating Dussehra which is about how good always wins over the evil. Since morning, many Bollywood stars have been pouring wishes on the auspicious day. And now, it is Bollywood's romantic hero, Shah Rukh Khan, who took to social media and wished his admirers a 'Happy Dussehra'. "Wishing you success, health and happiness on this special day as we celebrate the triumph of good over evil," he captioned the post. Shah Rukh Khan to Play the Double Role of Father and Son in Atlee's Next?

Along with the post, SRK also shared a picture which sees Lord Ram. Quite blissful, must say. As soon as Shah Rukh wished his fans on Twitter his comment section was filled with positive replies. Dussehra is celebrated because on this day Lord Ram killed the mighty Ravan and freed Sita from the clutches of the devil. It's also called Vijayadashami as it comes at the end of the Navratri. Before Atlee's Film, Shah Rukh Khan Played Double Role of Father and Son in This '90s Flick.

Happy Dussehra to all... wishing you success, health and happiness on this special day as we celebrate the triumph of good over evil. pic.twitter.com/sfIcpXBqZA

Meanwhile, on the work front, SRK has not tey announced his next and was last seen opposite Anushka Sharma and Katrina Kaif in Zero (2018). However, reports are that King Khan is all set to play a double role that of father and son in Kollywood filmmaker Atlee's action drama. Stay tuned!

(The above story first appeared on LatestLY on Oct 25, 2020 07:20 PM IST. For more news and updates on politics, world, sports, entertainment and lifestyle, log on to our website latestly.com).