Shah Rukh Khan to Play the Double Role of Father and Son in Atlee's Next?

As per a report in a leading tabloid, Shah Rukh Khan would be seen playing a double role in Atlee’s Hindi film that is touted to be a commercial potboiler. The actor will play the role of father and a son where "conflicting ideals drive a wedge between them." 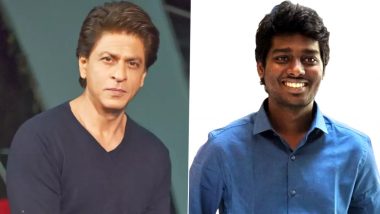 Ever since pictures of Kollywood director Atlee and Bollywood superstar Shah Rukh Khan’s picture had hit the internet, speculations were rife that the two have met to discuss on a film. Then there was buzz that Atlee will be making his directorial debut in Hindi Cinema with Shah Rukh Khan as his lead hero. According to multiple reports, King Khan would be seen playing a double role in Atlee’s action drama. As per the latest report by mid-day, the actor will play the role of father and a son where "conflicting ideals drive a wedge between them." Shah Rukh Khan and Atlee's Action Thriller To Be Produced by Karan Johar?

Atlee has directed totally four films and those films have been a blockbuster – Raja Rani, Theri, Mersal and Bigil. His last three projects were with Thalapathy Vijay and we did see the superstar of Tamil Cinema in dual and triple roles. Earlier, as per a report in Mirror, Shah Rukh Khan would be seen playing double avatars - the role of an investigating officer and a criminal. Shah Rukh Khan to Start Shooting in Summer 2020 for Atlee’s Bollywood Directorial Debut?

About Shah Rukh Khan and Atlee’s collaboration, a source revealed to Mirror, “Atlee and Shah Rukh have been discussing a potential collaboration for two years now and have brainstormed on multiple subjects. They have finally fixed on an action film, which has SRK playing an investigating officer of a top Indian agency and a most-wanted criminal. The story revolves around these two characters who are worlds apart, their conflict and confrontation.” The director is reportedly working on the script with director-producer Karan Johar’s team of writers.

In the past, the actor has played double roles in multiple films. His comical avatars in Duplicate left us ROFL. His film Paheli was India's official entry for the Oscars. And of course, the VFX wonder Fan. Stay tuned for further updates about the upcoming project.

(The above story first appeared on LatestLY on Oct 23, 2020 02:36 PM IST. For more news and updates on politics, world, sports, entertainment and lifestyle, log on to our website latestly.com).