The Main Tera Hero star, Asim Riaz recently took to social media to share his condolences about Sidhu Moose Wala's death and reminisced over memories they shared together. 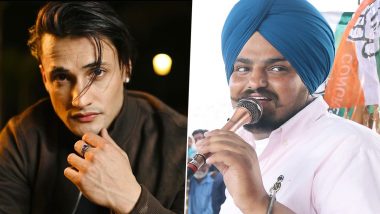 He captioned the post and wrote, "I remember when I was in Chandigarh you called me over for dinner, I came all the way to moosa pind just to see you and how proud I was to witness an artist like you. You made me listen songs from your album moosetape, we had conversations how tupac was so fearless, about his music and all the west and east coast conversations, we ate food from the same plate and you made me have missi roti, we had a ball brother that nite and then later you told me after when I made you listen my built in pain track.. Asim dont stop making music, that thing is gonna stay with me for ever sidhu and your music..Rip".

On Sunday evening, Moose Wala was shot dead by unidentified assailants in Jawaharke village of Mansa district. The incident occurred two days after Punjab Police withdrew the security cover of 424 persons including the Punjabi musician. He had joined the Congress party in December, last year, ahead of the Assembly elections. Bigg Boss 13 Fame Asim Riaz Looks Dapper as He Poses On a Bike.

Notably, CCTV footage has emerged on social media which shows two cars trailing Moose Wala's vehicle moments before he was shot dead in Mansa. The video, however, is not verified by the state police yet. Meanwhile, several Punjabi artists including Parmish Verma, Diljit Dosanjh and Sargun Mehta among others have also condoled Moose Wala's death.