Esha Gupta Opens Up on Being Called ‘Gareebo Ki Angelina Jolie’, Says, 'It’s My Parents’ Production and I Look Like This’

Bollywood actress Esha Gupta who rose to fame from Jannat 2 recently spoke in length on being trolled and tagged as a cheaper version of Hollywood actress Angelina Jolie. Check it out. 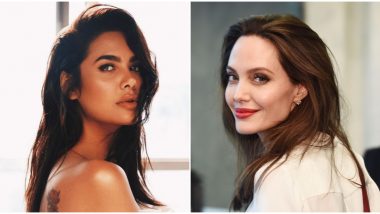 Bollywood and comparisons go hand-in-hand. One such celebrity who is compared with Hollywood sensation, Angelina Jolie is none other than Esha Gupta. From the time she made her debut with Mahesh Bhatt's Jannat 2, instant comparisons were drawn. However, not all comparisons were made in good taste. As there were a few trolls who tagged Gupta as ‘Gareebon Ki Angelina Jolie’ (cheaper version of Angelina Jolie). Well, in one of her recent interviews, the actress opened up about such trolls and expressed how initially it used to annoy her. Not just this, as she also spoke about making it in the industry sans a god-father, her struggles and web series, RejctX. REJCTX 2 Actress Esha Gupta Believes Youngster of This Generation Are Relying on Social Media Rather Than Living in the Moment.

In a live session with BollywoodLife, Esha addressed Angelina fuss and said, "She’s one of the hottest women (emphatically). You know what annoys me, well…not anymore, but what used to annoy me was when people would be nasty earlier and would love to troll…now they’ve become less bitter. However, people would call me, ‘Oh…gareebon ki Angelina Jolie (the poor man’s Angelina Jolie).’ And, I used to say, ‘Yeah, but you’re calling yourself gareeb (poor) there.’ I’m not saying that, I did not ask to look like this, it’s my parents’ production and I look like this.” Esha Gupta’s Love Story Comes Booming Alive on Instagram; Meet Her Spanish Boyfriend Manuel Campos Guallar (View Pic).

However, later she added that at times when fans posts collage of her with Jolie she does feel that little similarities exists. "Yeah, I do, but, I’ll be honest, I still don’t see it (the analogy with Jolie’s visage). Well, I may have seen it a couple of times, when people do that collage with two posters. So, at that time, the pictures they actually picked up, even I was like, ‘Okay maybe.’ Also, for me, I’ve always felt that I look like my mother. But, when people say it, and like I said, when they put the pictures together, then I’m like, ‘Yeah, maybe!", she was quoted saying. Esha Gupta Looks Piping Hot in her New Picture in a White Monokini.

"It took me some time to realise the fact that there will be a small section of people who will always be unhappy with whatever you do. Not just for me, but for everyone. That's how they are, and I just stopped caring about it after a point. Look at her though, she's not only one of the hottest, I really wish I had talent like her or be where she is...I really wish that. And she has Brad Pitt by the way...so (laughs and trails off)," she concluded.

Rightly said Esha one should really pay no heed to such trolls and move on. Meanwhile, on the professional front, Gupta was last seen in ZEE5's, RejectX Season 2. Stay tuned!

(The above story first appeared on LatestLY on May 23, 2020 11:45 AM IST. For more news and updates on politics, world, sports, entertainment and lifestyle, log on to our website latestly.com).