Feroz Khan Death Anniversary: Did You Know This Legendary Actor Was Part of a Hollywood Film?

The legendary Feroz Khan may not longer be with us having passed away 11 years back, on April 27, 2009. But for Bollywood lovers, he will always be the ultimate symbol of swag and flamboyance. 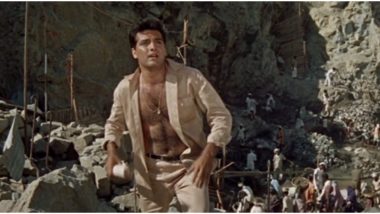 The legendary Feroz Khan may not longer be with us having passed away 11 years back, on April 27, 2009. But for Bollywood lovers, he will always be the ultimate symbol of swag and flamboyance. A multi-faceted personality, Feroz Khan had dabbled in acting, producing and directing film, and was part of gems like Apradh, Khotey Sikkey, Naagin, Dharmatma, and Qurbani. He had also directed Dharmatma, Qurbani, Davayan, Jaanbaaz, Yalgaar, Prem Aggan and Janasheen. But did you know Feroz Khan had also acted in a Hollywood film too? Fardeen Khan Birthday Special: Five Movies Of The Actor That You Can Watch Today.

That Hollywood film was Tarzan Goes To India and starred Jock Mahoney in the lead as the titular ape-man. The 1962 film has the character been called in India by a princess to save a huge herd elephants whose existence is being threatened by the construction of a dam near the forest.

Feroz Khan has a supporting role in the film as a dam employee who opposes the villains in the construction of the dam. It was an early role for the actor, who was yet to attain the superstar status and had to cruise by those days with his rugged handsome looks that was in ample display in Tarzan Goes To India, even though the spotlight was not always on him. It's a Tarzan movie after all!

Watch the trailer of Tarzan Goes To India here:

Apart from Khan, the other known Indian actors in the film are Simi Garewal and Murad. The movie, however, failed to do good business at the box office, and was also lambasted by the critics then. Khan never acted in a Hollywood venture again. Now years later, this Tarzan oddity can be considered as a hidden gem for us to revisit and enjoy the cheesy, animal fun on display here.

(The above story first appeared on LatestLY on Apr 27, 2020 11:26 AM IST. For more news and updates on politics, world, sports, entertainment and lifestyle, log on to our website latestly.com).