The duo knows their social media PDA game and often drop mushy photos with each other. Fans love how comfortably adorable they are with each other and love to spot the two together. Not just each other, Priyanka and Nick have immense love and respect for each other's family. 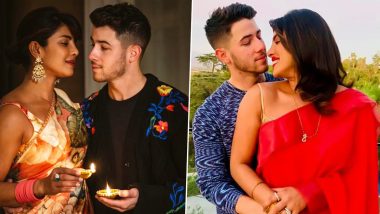 Priyanka Chopra shocked the world when she announced her engagement with Nick Jonas back in 2018. The two got hitched in a big fat Indian wedding style and stunned everyone with the grand festivities. Its been two years since the couple tied the knot but their romance just gets cuter day by day. The two are very supportive of each other and are often seen cheering for each other when needed. Priyanka Chopra and Nick Jonas’ Wedding in The Simpsons’ World! This Artwork Is Going Viral on Instagram.

The duo knows their social media PDA game and often drop mushy photos with each other. Fans love how comfortably adorable they are with each other and love to spot the two together. Not just each other, Priyanka and Nick have immense love and respect for each other's family. We often see al of them chilling and having fun together. Priyanka and Nick's wedding meant embracing each other's culture as well and we love Nick jiju for giving all the due respect to the Indian culture. Be it crooning on Bollywood songs, paying Holi or celebration Thanksgiving, the lovebirds know how to make it a party.

The duo got hitched on this day two years back in 2018 and are celebrating their anniversary today. We thought we would take you all down the memory lane and revisit the timeline of their love story. So here is how it all started!

During an interview, Priyanka had revealed that it was Nick who sent the first message. Admitting the same, Nick revealed that he sent a text to Priyanka's Quantico co-star and Jonas's Careful What You Wish For co-star Graham Rogers inquiring about PeeCee. He sent a message saying, "Priyanka. Is. Wow."

Nick made the first move and made the first initial contact via Twitter DM.  He had dropped the following text saying, "I'm hearing from a few mutual friends that we should meet." He added that Priyanka responded day of with a message that said, 'My team can read this. Why don't you just text me.'" This was the beginning of their love story.

February 2017: The Duo Met For The Very First Time And Started Hanging Out Casually

Priyanka and Nick's first official meeting was at the Vanity Fair Oscars Party. Nick was flattered with how gorgeous Priyanka looked and went down on one knee and asked, "You're real. Where have you been all my life?" The two had drinks later and continued to meet each other from time to time. Nick also met PeeCee's mom during these months as well.

May 2017: Nickyanka Attended The Met Gala Together.

Priyanka and Nick made a stunning entry at the Met Gala 2017 and had everyone talking about their chemistry. The two were not invited as a couple but decided to go together as they both were wearing Ralph Lauren. Priyanka Chopra Attends Her First Jonas Brothers Concert in Atlanta, Actress Cheers the Terrific Trio – Nick, Kevin and Joe! See Pics, Videos.

After almost a year the two made an entry at the Met Gala carpet together again and had everyone talking about their equation. The pair spent Memorial Day weekend together, which Priyanka mentioned was their third date together. These outing just made their relationship tabloid official.

A little after in June, people started noticing how Priyanka and Nick would drop cute comments on each other's pictures. They also attended Nick's cousin's wedding together in June. The two also visited Priyanka's family in Mumbai as well.

It was Priyanka Chopra's birthday when Nick Jonas finally got down on one knee and popped the question in Crete, Greece. Priyanka revealed that Nick had even got Tiffany & Co. in London to shut the store in order to pick the perfect ring for his lady.  Priyanka was speechless. “No joke—she took about 45 seconds. Forty-five seconds of silence,” Jonas shared.

The duo finally makes it official to the world! Both Priyanka and Nick shared snaps from their engagement ceremony on social media with cute captions. Earlier, people noticed the big rock on PeeCee's ring finger during Raveena Tondon's party but it was only after the Roka when the two let the world know about their love. Later in September, the two also made their first red carpet appearance as an engaged couple.

Soon after the engagement, Priyanka had a bridal shower at Tiffany & Co.’s Blue Box Café in New York City. She then headed out for her bachelorette party in Amsterdam in November. Priyanka was tagged along by filmmaker Shrishti Behl, Tamanna Dutt, Natasha Pal, Dana Supnick-Guidoni, Chanchal Dsouza, and Priyanka's future sister-in-law Sophie Turner for the bachelorette weekend.

Nick Jonas also had a bachelor party set sail on a massive yacht. While the destination has never been revealed, we hear that Nick gifted his groomsmen custom electric scooters.

The duo arrived in India for the wedding preparations. PeeCee welcomed Nick with a cute post. The two even help a prayer ceremony for their wedding at Priyanka's Bandra residence.

The wedding festivities begin and we spot the happy couple having the best time. Their Mehendi was a colourful affair while the sangeet was a musical celebration involving dance performances by all the family members on both sides. Priyanka Chopra-Nick Jonas Wedding: PC’s 75-Ft Long Veil Inspires Hilarious Memes on Twitter.

It was finally the big day! The wedding took place at the Taj Umaid Bhawan Palace in Jodhpur, India. The couple had both a traditional Indian wedding and a Christian wedding service officiated by Jonas's father Paul Kevin Jonas, Sr. Both Nick and Priyanka wore custom looks by Ralph Lauren. Nick's brothers—Joe, Kevin, and Frankie Jonas—and Priyanka's brother Siddharth served as groomsmen, while her sister Parineeti Chopra, Sophie Turner, Danielle Jonas, Arpita Khan, and BFF Isha Ambani served as her bridesmaids. The Hindu ceremony was held the following day which ended with a Bidaai and a bridal ritual.

PeeCee and Nick held 5 receptions for all their friends and family. The first reception took place on December 4 in Delhi. The second reception and third wedding receptions are held in Mumbai on December 19. The couple had another reception for the Bollywood community the following evening. teh lovebirds jubilated their marriage one last time in Belmont, North Carolina, where Nick's father grew up and the family owns a restaurant, Nellie’s Southern Kitchen.

The duo was then seen in a music video titled Sucker. It featured the whole Jonas clan including Priyanka's sisters-in-law Danielle Jonas and Sophie Turner and brother-in-law Kevin and Joe.

The couple is now living their fairytale and often make us all go mushy. Here's wishing the power couple a very happy anniversary.

(The above story first appeared on LatestLY on Dec 01, 2020 12:00 AM IST. For more news and updates on politics, world, sports, entertainment and lifestyle, log on to our website latestly.com).