Happy, Hardy and Heer First Look: Himesh Reshammiya to Feature in a Double Role in This Next Project – Watch Video

The first look of the upcoming Himesh Reshammiya starrer film Happy, Hardy and Heer was released today. The movie stars Sonia Mann as the female lead and features fan-favourite Himesh in dual roles. 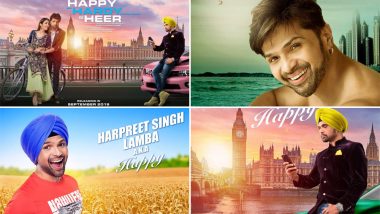 Himesh Reshammiya has a fan base of his own. And here is a treat for those fans. The actor-singer will be next seen in a double role in a movie named, Happy, Hardy and Heer. The first look of the film was released on the internet today and it looks like a fun rom-com. And of course, since it is a Himesh Reshammiya movie, it is obvious for us to expect some mind-blowing music from it. Fans still love to dance to numbers like Jhalak Dikhla Jaa and Aashiq Banaya Aapne. Himesh Reshammiya to Compose Music for Rajkumar Santoshi’s BadBoy.

On the work front, Himesh was last seen in the movie, Terra Suroor. Before that, he starred in the movie titled, The Expose, which, BTW, is getting a sequel soon. But before we get to that much-needed sequel, to satiate our cravings, Himesh will be seen in Happy, Hardy and Heer, which opens in theatres in September 2019. The Kapil Sharma Show: Sony TV’s Superstar Singer Judges Alka Yagnik, Himesh Reshammiya and Javed Ali Add a Musical Tadka To The Show!

Check out the first look of Happy, Hardy and Heer here:

Happy, Hardy and Heer stars Sonia Mann as the female lead. The actress has featured in films like Dhee Ante Dhee, Motor Mitraan Di and Bade Changay Ne Mere Yaar Kaminey. The movie has been directed by Rajendra Toraskar and has been entirely shot in Glasgow. The movie was previously titled Jatt, Batt and Juliet.

(The above story first appeared on LatestLY on Jul 11, 2019 05:10 PM IST. For more news and updates on politics, world, sports, entertainment and lifestyle, log on to our website latestly.com).