Actor Aadar Jain got a chance to work with veteran star Jackie Shroff in the upcoming film Hello Charlie, and he cannot stop gushing about the senior actor. 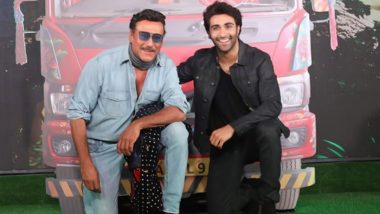 Actor Aadar Jain got a chance to work with veteran star Jackie Shroff in the upcoming film Hello Charlie, and he cannot stop gushing about the senior actor. "I've always been a big Jackie Shroff fan and after working with him, I've become an even bigger fan of his. He's a rockstar in the truest sense and hands down the coolest person I've met! I had a blast working with him, we share a great bond and I just have the most amount of love and respect for him, as an actor and as a human being," said Aadar. Hello Charlie: Aadar Jain Claims That He Got a Once-in-a-Lifetime Role in the Comedy.

He added: "I've known him for many years now even before I became an actor. We met first on the sets of Farah Khan's ‘Happy New Year' where I worked as an assistant director and I always wanted to share screen space with him. So, to finally get the opportunity to work alongside him in ‘Hello Charlie' was really special." Jackie was a big motivator for Aadar on the sets: "To be honest, he just always showered me with a lot of love and praise, and that in itself was really encouraging and motivating for a young actor like me. If at all, he just said ‘bindaas bidhu just enjoy yourself!" Hello Charlie Trailer: Aadar Jain and Jackie Shroff’s Adventure-Comedy Film Is Full of Fun (Watch Video).

"Every minute with Jackie Shroff sir on set was a laugh riot or an exchange of warm words. We heard a lot of young cool African music together and exchanged many interesting stories about my family and his," said Aadar. "Hello Charlie" will premiere on April 9. Directed by Pankaj Saraswat, the film also features Shlokka Pandit, Rajpal Yadav and Elnaaz Norouzi. It has been produced by Ritesh Sidhwani and Farhan Akhtar.

(The above story first appeared on LatestLY on Mar 31, 2021 12:53 PM IST. For more news and updates on politics, world, sports, entertainment and lifestyle, log on to our website latestly.com).