Hrithik Roshan's Next with Tiger Shroff to Clash with Akshay Kumar's Housefull 4? 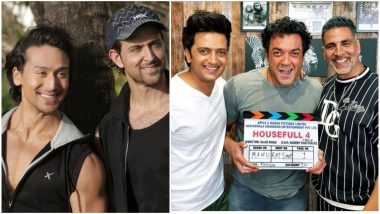 Hrithik and Tiger's next to clash with Akshay's Housefull 4? (Photo Credit: Instagram)

Hrithik Roshan is currently gearing up for two major releases this year. He has Super 30, a biopic on mathematician, Anand Kumar and another action drama with Tiger Shroff. While the star is curretly shooting for both the projects simultaneously (certain portions were added in Super 30), no major details of his movie with the Baaghi actor are out yet. However, cinematographer Ben Jasper recently too to his Instagram out to reveal the film's release date. Yes, no official confirmation about the same is out yet but it's quite safe to decude that the film is all set to clash with Akshay Kumar's Housefull 4 on Diwali 2019. Dipannita Sharma Joins Hrithik Roshan and Tiger Shroff in the Upcoming YRF Movie.

As per a report in Bollywood Hungama, Ben Jasper who's working as a cinematographer in Hrithik v/s Tiger took to his Instagram account to make this big announcement unintentionally. He captioned a picture saying “First look… the new US $100 million Bollywood blockbuster, about half way through,… had to crop the other 2 out as they are media shy… @hrithikroshan @tigerjackieshroff … can’t show anything yet… release this year Diwali 2019." While the pic or the announcement was deleted later, one can very well assume if it was a goof up and he revealed something that he wasn't supposed to. Salman Khan’s Bharat, Akshay Kumar’s Housefull 4, Prabhas’ Saaho – 10 Movies That Are Expected to Break Box Office Records Records in 2019.

If Hrithik and Tiger's next indeed clashes with Akshay's Housefull 4, it will be history repeating itself. Earlier the clash between the same actors (Not Tiger) was witnessed when Rustom and Mohenjo Daro locked horns at the box office 2016. While the outcome was in the Khiladi of Bollywood's favour then, let's hope Mr Roshan is able to taste success now.

(The above story first appeared on LatestLY on Feb 18, 2019 01:02 PM IST. For more news and updates on politics, world, sports, entertainment and lifestyle, log on to our website latestly.com).