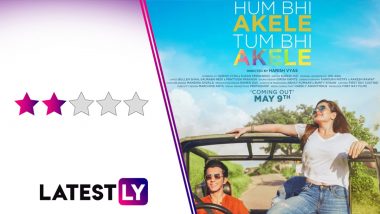 But let's not say that there isn't a love story in the film. As Veer (Anshuman Jha) puts it, love transcends beyond lust, genders and even sexuality. And so does what he shares with Mansi (Zareen Khan), even though Veer is gay and Mansi is a lesbian.

Both have run away from their respective homes in similar circumstances. Veer, unlike what his name suggests, couldn't tell his strict father of his sexuality and breaks off his engagement with a childhood friend to run towards his lover, who is married. Similarly Mansi's running away from her home is spurred by a potential marriage alliance. They meet in a pub in Delhi, and Veer, nursing a broken heart, decides to drive Mansi in his jeep as she goes to meet her girlfriend in Mcleodganj. As they spend more and more time, they come to an understanding that there is an undefinable bond developing between them that is never sexual but transcends beyond friendship.

Hum Bhi Akele Tum Bhi Akele has an exceptional premise by revisiting the age-old boy-meets-girl-and-goes-on-a-trip trope, but with characters that aren't defined by conventional gender roles. The way Veer and Mansi's relationship develops from friends who ponder over being outcasts in the society, to something that they themselves can't put a name too, is likeable enough. The first time they dance together or when Veer proposes to Mansi that they they start living together and share half their love to each other are quite touching. Another highlight is the lovely music score. Hum Bhi Akele Tum Bhi Akele Uses Bulleh Shah’s Poetry To Fit the Film’s Theme of Discovering Identities.

And yet, for its unconventionality, Hum Bhi Akele Tum Bhi Akele feels more of a letdown thanks to some stilted writing and performances from certain actors. The warmth that is meant to be developed between the two leads is often lost over the kind of dialogues they are given to speak. Even the scenes they share lack the freshness needed to make the film stand out, if you remove out the gender un-norms. Towards the end, the movie opts for some very soap melodrama that doesn't create the required impact to leave us emotional. The subplot involving Veer's ex-lover and his wife felt like an unnecessary distraction.

It also doesn't help that Zareen Khan's performance also comes across as stilted. There are moments where she is decent, but in most other places Zareen's act comes across as lacking. On the other hand, Anshuman Jha does a splendid job as the meek, cleanliness-obsessed do-gooder.

- Some of the Performances Don't Leave a Mark

(The above story first appeared on LatestLY on May 09, 2021 08:01 AM IST. For more news and updates on politics, world, sports, entertainment and lifestyle, log on to our website latestly.com).