Hum Do Hamare Do Movie Review: Paresh Rawal and Ratna Pathak Shah Steal The Show With Their Crackling Chemistry in This Rajkumar Rao-Kriti Sanon Starrer!

Hum Do Hamare Do features Rajkummar Rao, Kriti Sanon, Paresh Rawal, Ratna Pathak Shah and Aparshakti Khurana. Directed by Abhishek Jain and produced by Dinesh Vijan the film is streaming on Disney+ Hotstar. Prashant Jha has penned the dialogues and screenplay and the story is by Deepak Venkateshan.  Music is given by the duo Sachin-Jigar. 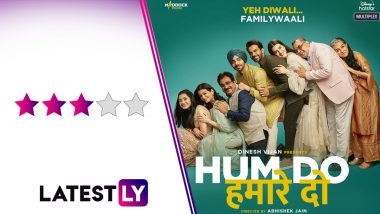 Hum Do Humare Do Movie Review!

Hum Do Hamare Do Movie Review: The might of a true actor lies in knowing when to stop and allow the co-actors to bloom organically. The true potential of the intelligent performer lies in taking a backseat when it is needed, therefore allowing the narrative to grow on the audience. Rajkummar Rao and Kriti Sanon do exactly that with remarkable ease, so much so that, they become true darlings of Hum Do Hamare Do, even if Paresh Rawal and Ratna Pathak Shah steal the thunder with their crackling chemistry and their undeniable acting prowess. Hum Do Humare Do: Paresh Rawal Heaps Praise on His Co-Star Rajkummar Rao, Says ‘I Got To Learn So Much From Him’.

The result of this understanding on the part of the film's lead pair, makes Hum Do Hamare Do a delightful watch. The film revolves around a couple who ‘adopt’ their parents. therefore subverting the notion on its head. In an industry that solely and mostly relies on star power and usually predictable affairs with repeated motifs is a norm Hum Do Hamare Do works because it is absolutely slice-of-life with its heart at the right place. It's not a rollicking ride all the way with the obvious roadblocks and some lousy writing, but the earnest performances from the actors coupled with the crisp storyline make this endeavor work in more ways than one.

Dhruv (Rajkummar Rao) is a successful entrepreneur. He is a self-made man with everything at his disposal-a luxurious home, a fancy car, an enviable career. What he doesn't have though is a family as he was raised on a roadside dhaba as an orphan.  Dhruv falls for the effervescent Anya (Kriti) who has put forth only one condition to tie the knot with the charming man. The guy needs to have a family and a cute dog right alongside! While the latter is easily manageable, but the former needs astute management to satisfy the demand. Dhruv decides to 'adopt' a fake family to make Anya happy. But will the premise based on a lie hold? You will have to watch the drama unfold to get the answer to that one!

You are in for entertainment as Ratna Pathak Shah and Paresh Rawal take center stage quite swiftly. The veterans seem to be having a good time while delivering a performance that makes you giggle and simultaneously warm the cockles of your heart with their unmatched comic timing. Rawal is an absolute master at playing the pauses so well as Ratna compliments him with a range of expressions that don't miss a single beat. Amidst the predictable elements and the chaos that ensues, thanks to the hatke narrative, director Abhishek Jain explores human emotions, their complex interplay as indeed the definition of a 'perfect'  family in an impressive style. Mere Paas Sima Hai: Rajkummar Rao, Kriti Sanon’s Quirky Conversation With Matchmaker Sima Taparia About Their Upcoming Film Hum Do Hamare Do Is a Fun-Watch (Watch Video).

Paresh Rawal and Ratna Pathak Shah's experience as supreme performers comes into play to weave a story that will warm the cockles of your heart in spite of the muddled script. The two are simply a treat to watch as they bring much maturity and fun to the table even if the story demands them to be predictable, obvious, and loud in some parts.

Rajkummar Rao is at absolute ease once again. He enjoys doing so less to convey so much more and Kriti delivers a performance that matches Rao's flawless delivery.

The film strikes all the emotional chords and serves a generous dollop of humor. The crisp editing and the adequate runtime makes Hum Do Hamare Do a breezy watch!

Hum Do Hamare Do fails to excite you in totality as it revolves around predictable motifs with limited emotional reach. It fails to dig deeper and doesn't dare to go beyond the surface, even if the premise holds so much promise.

With so much love oozing from the two lead pairs of the narrative, the album fails to evoke anything mushy with music or with its average background score.

The film offers a mixed bag of enjoyable but predictable elements that somehow work. It tickles your funny bones and has some emotional moments too, but it takes a little longer for fun to actually begin.

Much like most of us, as indeed like our families, Hum Do Hamare Do is flawed but it is a breezy ride thanks to the earnest performance delivered by the cast. It certainly has its heart at the right place! Hum Do Hamare Do is streaming on Disney+ Hotstar.

(The above story first appeared on LatestLY on Oct 29, 2021 01:05 PM IST. For more news and updates on politics, world, sports, entertainment and lifestyle, log on to our website latestly.com).